Did You Know the Jonas Brothers Opened For Kelly Clarkson in 2005? Neither Did Kelly! 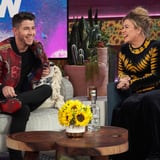 Serious question: Did you know that the Jonas Brothers opened for Kelly Clarkson 14 years ago? Well, they did . . . kind of. On Thursday's episode of The Kelly Clarkson Show, Nick Jonas and Kelly took a trip down memory lane, revealing that Nick and his brothers performed at the American Idol alum's concert over a decade ago. "I was reading the pre-interview for this. I had no idea that y'all opened for me in 2005," she said. "I feel like I just got really cool."

Nick went on to explain how the Jonas Brothers opened for her without actually opening for her (because, apparently, that's totally possible). After sharing the adorable backstory, the "Only Human" singer attributed their stardom to Kelly's impact. "We owe you 20 percent," he joked. Watch Nick and Kelly reminisce about the connected past and converging present as they gear up to compete against each other on The Voice!