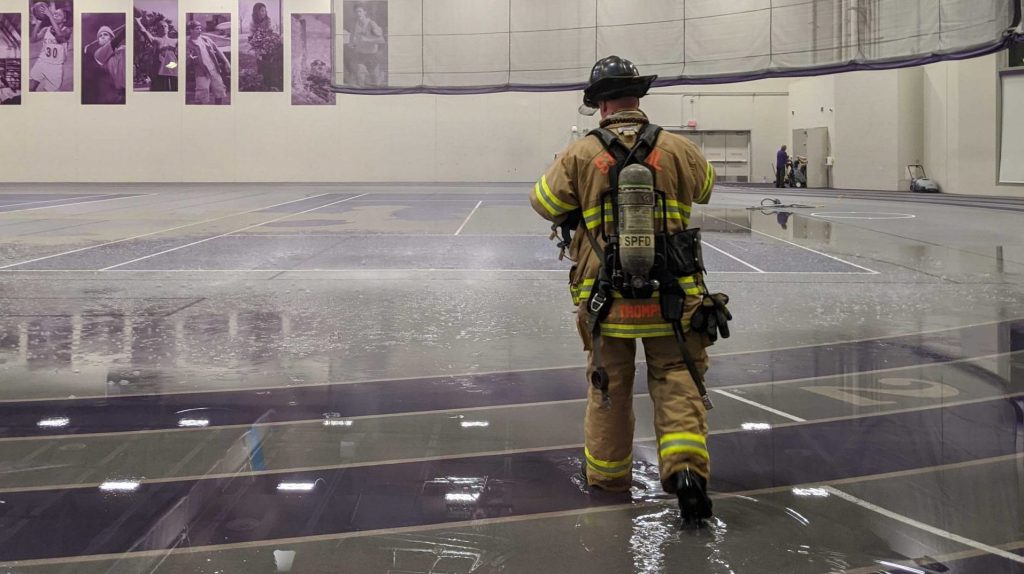 The University of St. Thomas’ north campus was on clean-up duty Tuesday following two unrelated incidents that caused a flood and a power outage.

Shortly before 7:30 p.m. Monday, a fire sprinkler head in the Anderson Athletic and Recreation Complex field house was hit by a softball, causing water to be discharged from the fire suppression system. The softball team was practicing indoors.

Less than an hour later, the groundwater pump system in the O’Shaughnessy Educational Center failed. More than a foot of water entered the main electrical vault, causing a power outage.

A campus-wide alert, sent at 8:56 p.m. originally blamed the loss of power on the tripped sprinkler head. This alert was incorrect.

“It was just bizarre,” said Vineeta Sawkar, media spokesperson for the University. She stressed that the softball incident had nothing to do with the power outage.

The St. Paul Fire Department had to rescue at least one person from an elevator, according to TommieMedia, a student news organization.

The primary fuses were replaced, the power was restored and the pumps were fixed by midnight. The school is on Summit Avenue in St. Paul.

UPDATE: A campus-wide alert, issued at 11:28 p.m., reported facilities management had identified the problem and are working to restore the power. The university anticipates power will be restored within the hour. https://t.co/GIfBVqc2Lr