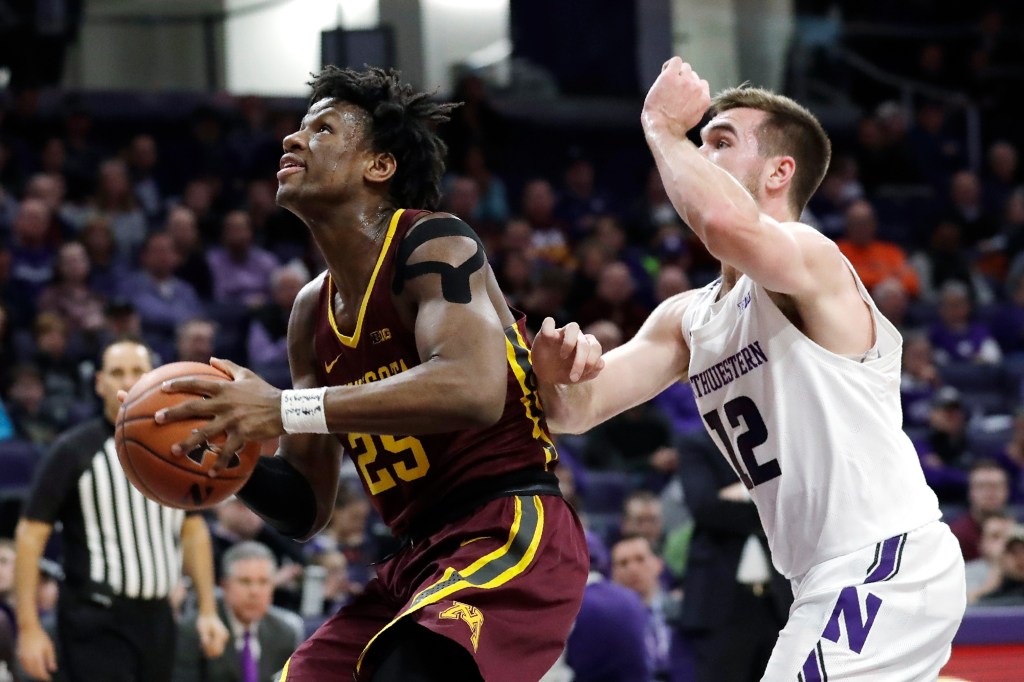 EVANSTON, Ill. — Coach Richard Pitino is sharing a message about his team — the Minnesota Gophers are still alive.

Daniel Oturu had 22 points and 12 rebounds, and Minnesota beat Northwestern 83-57 on Sunday.

Marcus Carr added 18 points and Gabe Kalscheur and Payton Willis had 14 apiece for the Gophers (13-13, 7-9), who snapped a three-game losing streak.

“The season’s not over. It’s been pronounced over for some reason, but it’s not over,” Pitino said. “The beauty of our league is you got great wins right in front of you — opportunities, I should say.”

Oturu, one of the top big men in the Big Ten, blocked three shots and shot 3 for 5 from three-point range in addition to his 15th double-double this season.

The 6-foot-10 sophomore entered Sunday as the second-leading scorer in the league with 19.6 points per game and the top rebounder with 11.4 per game.

Oturu’s one-handed dunk gave the Gophers a 55-34 lead with 13:21 remaining. His career-high third three-pointer extended the margin to 61-38.

“I was just wide open so I just kept shooting,” Oturu said about his threes.

The Gophers halted their offensive woes, shooting 48.4 percent from the field and made 14 of 30 from beyond the arc. Minnesota entered Sunday shooting 41.5 percent overall and 31.3 percent from three-point range.

“I didn’t do anything different, stayed the course,” Pitino said. “This is a league where everybody is pronounced dead at some point, and everybody wants to blow everything up at some point, everybody. It doesn’t matter who you are. Nobody’s immune to it.”

Northwestern went 38.7 percent from the field and 16.7 percent on threes and was outrebounded 48-29.

“I’m certainly disappointed in how we played,” said Northwestern coach Chris Collins, whose team is the youngest in the Big Ten. “Our staff take full responsibility for it. I have to do a better job of having our guys ready. It’s that point of the season where you need to be ready to play and compete at a high level, and you’re not going to be able to be competitive if you give up 83 points.”

The Gophers ended the first half on a 7-0 run for a 44-28 lead. Oturu had 13 points on 5-of-6 shooting and eight rebounds. Northwestern didn’t score for the final 2:42 before halftime.

“Ball goes in the basket — it’s a lot easier for everybody and then confidence builds,” Pitino said. “We have a young team. Nobody likes to hear it, but we do. So when they see that ball go in, I think we’re pretty good.”

Minnesota also beat the Wildcats 77-68 at home on Jan. 5 when Northwestern had just seven scholarship players available due to injury.

The Gophers’ hopes of reaching the NCAA Tournament remain dim after losing three of their last four. They’re just 2-8 on the road.

But Oturu echoed Pitino’s message that the .500-Gophers could finish the regular season strong.

“We gotta come into every game with a mentality of we’re playing for something,” Oturu said. “The season’s not over.”

BRIEFLY
— Isaiah Ihnen missed the game for Minnesota after injuring his wrist Saturday in practice.