Someone Reimagined Schitt's Creek as a Horror Series, and Wow, This Trailer 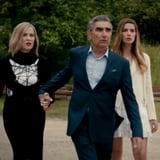 With Schitt's Creek's sixth and final season soon coming to an end, I'm doing everything I can to hang onto the series for dear life: eating up all the fascinating behind-the-scenes facts about the show, watching talk-show interviews with cast members, reminiscing on the characters' most iconic fashion moments, and yes, even scouring the depths of YouTube to find any and all videos to satiate my undying obsession with the show.

Said YouTube deep-dive led me to discover this glorious reimagining of Schitt's Creek as a creepy horror rather than lighthearted comedy series, aided by some expert music and editing choices. Even though it was technically first shared on the show's official page back in 2017, it deserves far more attention and appreciation than it's received so far.

In the horror-fied trailer, the Rose family loses their fortune and moves to Schitt's Creek, just as they do in the actual series, but when they arrive to the small town, mayor Roland Schitt turns out to be quite the terrifying villain, seemingly threatening to hurt the Roses. The montage features footage from various episodes - David Rose dramatically pulling back a shower curtain, Johnny Rose whispering to ask Stevie Budd if she's in danger, Twyla Sands saying there's a "murderer on the loose," and more - all recut with some spine-chilling background music.

Whoever created the nearly two-minute-long trailer deserves a freakin' award for their supreme editing skills. Watch it above, and then if you're still in the mood for some semi-scary Schitt's Creek content, be sure to admire the glorious trailer for Moira Rose's The Crows Have Eyes 3: The Crowening.