The Voice: Nick Jonas Wanted This Teen on His Team So Badly, He Jumped on Stage to Sing 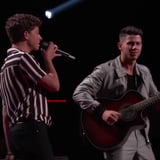 Nick Jonas is willing to go all-out for the singers considering joining his team on The Voice. As the newest coach on the NBC show, Jonas certainly has his work cut out for him when it comes to wooing contestants, but he's doing a pretty good job so far. Case in point: Tate Brusa's audition on Monday night. The 16-year-old from Salt Lake City impressed both Jonas and Blake Shelton with his cover of Ed Sheeran's "Perfect," but it was the "Sucker" singer who went the extra mile.

Jonas told Brusa he noticed moments where his voice could use some work, and to prove his point, he jumped on stage to do some real-time coaching. Jonas grabbed a guitar and gave Brusa some small pointers, which turned into a short but sweet duet. Not even Shelton's puppy could sway Brusa away at that point! Watch the full audition above to see how it all went down.