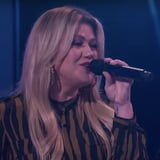 Kelly Clarkson just won't stop dropping gems on her daytime talk show. During Monday's "Kellyoke" segment, The Kelly Clarkson Show host was joined by the women of Wilson Phillips for a performance of their 1990 hit jam "Hold On." Not only does Clarkson's melodious voice fit right in with the trio, but movie-lovers will recall seeing the group performance the classic in Maya Rudolph and Kristen Wiig's Bridesmaids.

Who could forget the moment when Rose Bryne surprises Rudolph's Lillian with a live performance by Wilson Phillips during her wedding ceremony? Even though Wiig's Annie is reluctantly impressed (which is basically her mood thoroughly the entire film), she still joins the epic singalong because you don't let that kind of opportunity pass you by! Neither Wiig or Rudolph made a special appearance during Clarkson's cover with the musical trio, but it's still an amazing performance! Watch the foursome above, then check out Wilson Phillips performing the song on Bridesmaids.