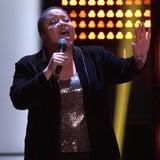 Getting a four-chair turnaround from the judges on The Voice is pretty rare, but Toneisha Harris did that during her blind audition on Monday night. Harris gave a soulful rendition of Foreigner's "I Want to Know What Love Is," and with her vocals alone, she was able to get Nick Jonas, Kelly Clarkson, John Legend, and Blake Shelton to slam their buzzers and fight for her to select them as her coach. "This is such a surreal moment for me. I was supposed to audition for The Voice about eight years ago, and my son was diagnosed with leukemia, so I cared for nothing else but him," Harris explained. "He is amazing now, second year in college."

Clarkson immediately teared up as she listened to Harris's story. "You might have taken the time off, but your voice didn't," Clarkson told her. "What we want is to be moved, and that's what you just did." Legend also gave Harris high praise for her performance, adding, "Whenever all of us turn, it's because something is really special. You don't need anyone of us to do well on this show. You are already amazing, you already deserve to be in the finale." Watch Harris's moving performance above now.