Minnesota, get ready for mandatory masks in some places, and the politics thereof 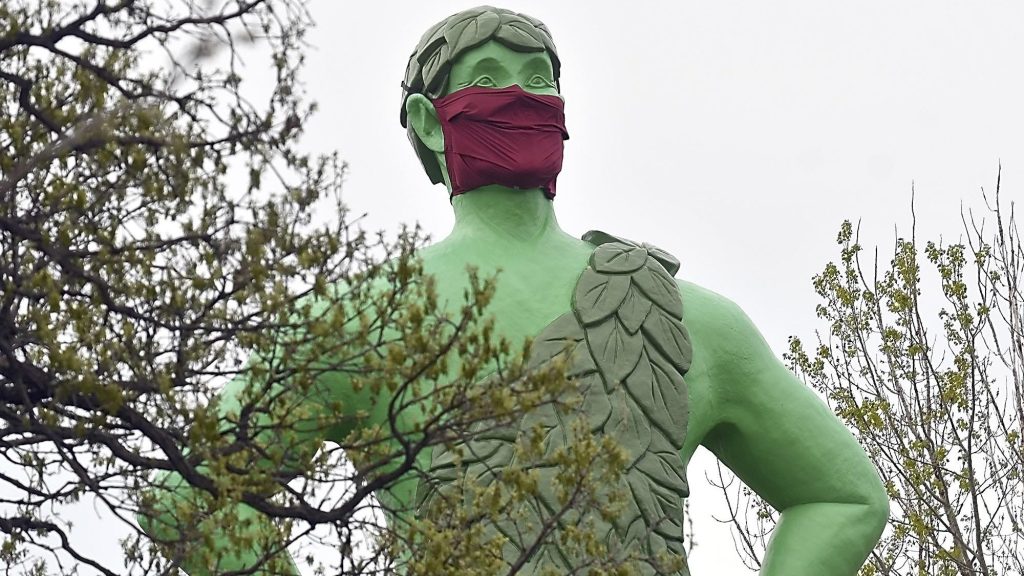 Mandatory coronavirus face coverings, such as cloth masks, are likely coming to a locale near you.

While a number of employers and stores have been requiring them for some time, now we’re talking legally required. As in, you could be ticketed and fined for blowing it off.

Minneapolis will be the first. On Thursday, Mayor Jacob Frey announced that, starting Tuesday, everyone will be required to wear masks in indoor public spaces. St. Paul Mayor Melvin Carter is considering something like that as well.

Some widespread masking will be required statewide come June 1, according to orders announced Wednesday by Gov. Tim Walz.

Even though only outdoor seating will be allowed, restaurant workers will be legally required to wear a face covering when they reopen to diners June 1. Inside a barbershop, hair salon, tattoo parlor, nail salon or other personal service establishments, everyone — both workers and customers — will be mandated to don a mask when they resume business June 1. Some workers with prolonged close exposure to clients might be required to wear face shields.

And as if that literal in-your-face adjustment to life amid a pandemic weren’t enough, there’s also the politics of it all. While hardly universal across the nation, the fact is that a blue-red divide has emerged on mask-wearing, with Democrats generally supportive and Republicans making up the lion’s share of opponents.

On Thursday, President Donald Trump, the most prominent Republican eschewer of mask wearing, had a near-showdown over masks in Michigan, where Democratic Gov. Gretchen Whitmer has mandated masks when indoors among other people since last month. In advance of Trump’s visit to a Ford plant, Michigan Attorney General Dana Nessel, also a Democrat, warned Trump that he needed to heed Whitmer’s mandate. In the end, Trump wore a mask for part of his visit, but not all of it, and he never donned one when in the view of media cameras.

Here’s the logic behind mass masking.

The point isn’t to protect the wearer, but rather everyone else who might come into contact with the wearer. Even relatively loose-fitting cloth face coverings, such as scarves or bandanas, can block contaminated droplets from being projected from the wearer’s mouth and nose. That’s called “source control.”

This matters because because the coronavirus thrives in the nose, throat and lungs. Infected people expel it when coughing, but also singing or talking. You can be infected — and contagious — with the coronavirus and not know it, either because you haven’t yet developed symptoms or because you’ll just be one of those mild cases who never develop noteworthy symptoms.

Here’s the guidance from the federal Centers for Disease Control and Prevention: “If everyone wears a cloth face covering when out in public, such as going to the grocery store, the risk of exposure to SARS-CoV-2 can be reduced for the community.” The Mayo Clinic backs that sentiment.

The White House task force on COVID-19, led by Vice President Mike Pence, has backed the CDC recommendation, and the White House itself now mandates everyone working there to wear one, except Trump and Pence.

The Minnesota Department of Health and Walz have also backed that sentiment. Current orders in place in Minnesota strongly encourage — but don’t mandate — that everyone wear masks when venturing outside their household and possibly coming into close contact with others, including outside. Several other states, from Illinois to Massachusetts, have some form of mandatory mask orders when out and about.

Like the coronavirus itself, the science on widespread mask wearing is new. The idea of slowing a pandemic via mass source control has never been tried.

At first, the widespread thinking of public health officials — with the notable exception of many in Southeast Asia — was that there was little point, and the CDC and Minnesota Department of Health initially advised against it.

But evidence has mounted steadily in support of it working. This culminated in a group of more than 100 experts from the U.S. and around the globe, including Nobel Prize-winning doctors, sending an open letter last week to all government leaders urging mandatory mask wearing.

When asked about why he hadn’t made it mandatory, Walz has said he worried that a legal requirement would only further politicize the issue.

When asked about the partisan divide that has developed over the topic, Frey said, “Watching out for the public health of your city should not be partisan. You don’t have a right to put other people at risk.”