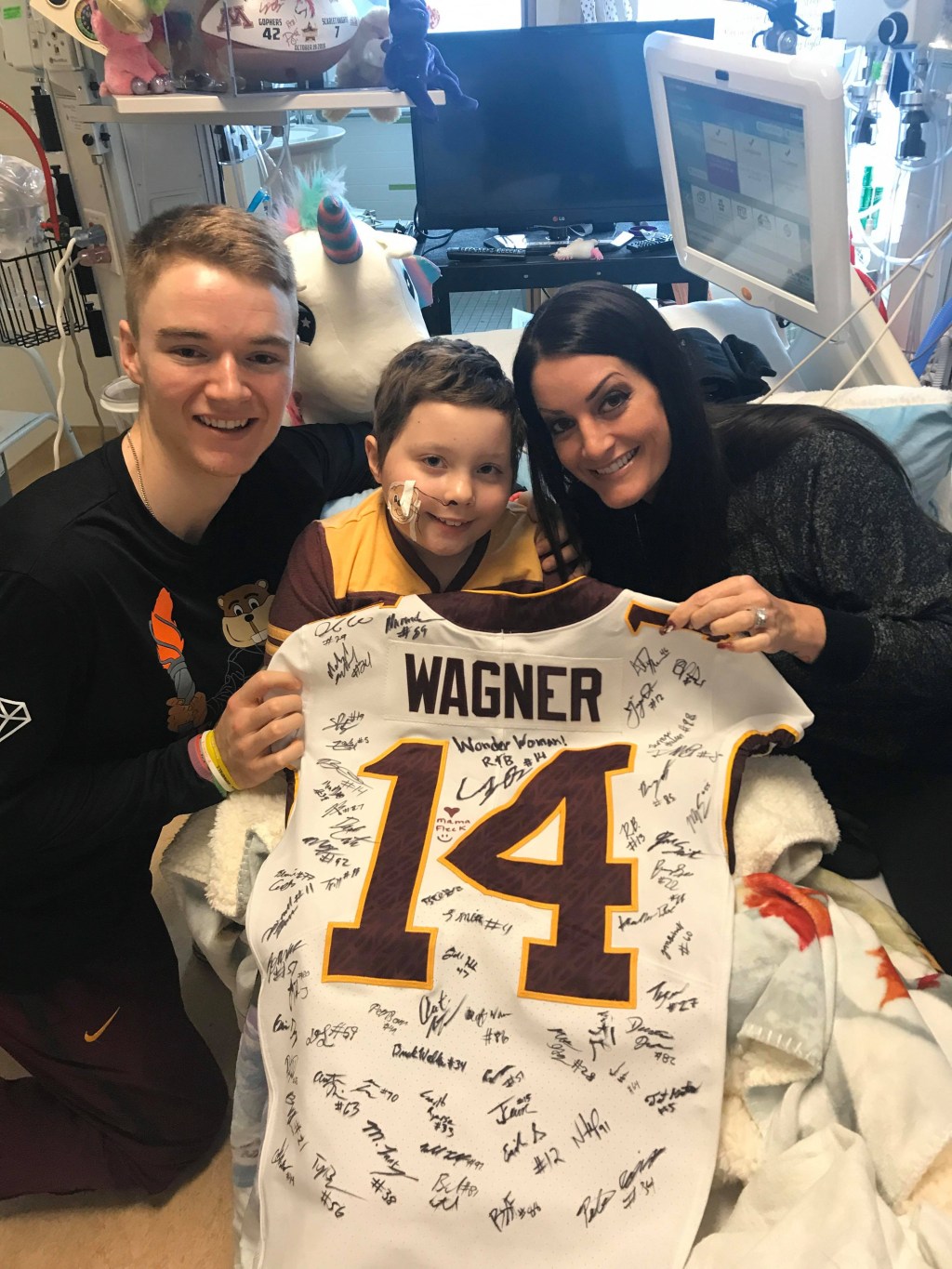 Megan Wagner was coming off the worst time of her life but still loved unicorns.

The 8-year-old Maple Grove girl had been bound to a wheelchair in April 2019, having just lost six inches of right femur and knee in a surgery to eradicate osteosarcoma cancer clinging on those bones.

She felt icky from chemotherapy at the University of Minnesota’s Masonic Children’s Hospital but rallied to go downstairs to a Gophers football team event.

Andrea said she felt like she was in a fog, exhausted from watching her daughter endure those painful periods while providing whatever comfort she possibly could.

From that lull, Megan and Andrea were lifted up by that day’s happiness and the beginnings of some pivotal friendships.

When Megan entered the lobby, Gophers football coach P.J. Fleck knelt beside her wheelchair. He said something to the effect of: “ ‘I look at kids like you, and you are my inspiration every day. When there are hard things, you can still smile. For you to do these hard things, you have to be a hero.’ ”

Gophers linebacker Thomas Barber also approached the shy girl, telling her she could pick out any faceprinting option she wanted, and he would get it done. The 6-foot, 240-pound senior soon had huge yellow Minion plastered on.

Andrea snapped out of her haze. She raced back upstairs to their hospital room to grab a stack of little cards with random quotes. She distributed them to some of the Gophers players and coaches.

“I gave it to Thomas and I said, ‘You made my little girl smile on a day that has been really hard,’ ” Andrea recalled in an interview last week. “ ‘So thank you for doing the face painting, for being you and being here.’ ”

The event’s interactions serve as a base layer in the Gophers football program’s woven support system for young cancer survivors and their families.

The famous frontman is one of their own, junior placeholder Casey O’Brien, who received scan results Monday that showed he has beaten cancer for a sixth time since he was a 13-year-old at Cretin-Derham Hall High School.

Another integral member in the unofficial club is Braxton Battaglia, a 10-year-old aspiring gymnast and leukemia survivor from Blaine.

“I always refer to it as Casey and his two sisters,” Fleck said in an interview Thursday. “They have gone through so much, and they look up to Casey so much. When Casey is hurting, they’re hurting. … It’s powerful, it’s surreal and very spiritual. When you connect on that level, there is nothing that can pull you apart.”

‘IF I CAN BEAT CANCER’

Braxton’s passion for gymnastics has endured several minor injuries as she kept going back to the mat, beam and bars. But after a long practice in January 2019, she came home with a headache that wouldn’t relent for days.

It led to her leukemia diagnosis.

While at Masonic, word soon spread of Braxton’s condition, and within a week, Fleck had left a voice message for Braxton’s mother, Erin, and then he popped in for a visit in February.

“He was actually the first visitor we had,” father Dan Battaglia said last week. “He came up by himself.”

A week later, the entire football team had written letters for Brax. A handful stuck out, including Casey’s.

“I understand what you are going through,” O’Brien’s note said. He soon followed up with an unannounced hospital visit.

Casey and Brax bonded over keeping up their athletic careers despite cancer fights. With 13 months of treatment left, Brax has been doing well physically, posting gymnastic routines in her Instagram stories on Thursday night.

“She will send me videos of her working out and climbing up ropes at her gym when she is in between treatments,” Casey said. “It reminds me exactly of myself. When I was playing high school football, I was bald and I was working out with my team and doing everything else that the other high school kids were doing. … She is out there doing the exact same thing, but she is four years younger (than I was). She is bald, but she is on the bars and doing flips.”

They send messages like “ ‘What did you do today? This is what I’m going to do to outdo you, Casey.’ ”

“We have fun going back and forth that way,” Casey said

Brax’s connections to the Gophers deepened when Fleck invited her to give a speech in front of the entire team at the U’s Larson Football Performance Center days before they left for the Outback Bowl in Tampa, Fla., in late December.

In front of 100-plus players and staff, Brax delivered an eight-minute speech without a hitch or a visible jitter.

“She did it all, didn’t want any help with it,” Dan said. “She is a unique little girl.”

Her talk featured a line that Fleck felt like was a mic-drop moment at the end of the speech: “If I can beat cancer, you can beat Auburn.”

The Battaglias were in Tampa, Fla., to watch Minnesota upset Auburn 31-24 to cap a historic 11-win season and earn a No. 10 ranking in the final Associated Press poll. In the euphoric postgame celebration, O’Brien ran over and leaped up into Battaglias’ seats to hug Brax and thank her family for coming to the game.

The Battaglias were waiting outside Raymond James Stadium when Fleck came out wearing the black long-sleeved  sweatshirt supporting their TB1F fundraising organization. He reminded her of that memorable quote back in Minnesota.

“If you can beat cancer, the Gophers can beat War Eagle,” Fleck said. “Give me a hug. Very proud of you. See my shirt. I made sure I brought it because after the win, this is what I’m wearing home.”

After Megan’s spirits were lifted in her first impression of the Gophers football team last spring, she received good news from her scans that following October.

But something else was off, her heart wasn’t functioning properly, and within 10 days, she couldn’t walk more than 10 or 15 steps at home without feeling exhausted. Her parents rushed her to Masonic, where tests revealed her heart function was bottoming out at 13 percent.

Megan’s heart failure led to open heart surgery to insert a pump to help her survive grueling chemotherapy rounds. She ended up spending 70 straight nights in the hospital. In that malaise, one night out was extra special.

Megan and about 80 Gophers football players set up a date at a Plymouth movie theater to see “Frozen 2” after its opening in November. Before the showing, she got up in front of the big screen to address the team.

“Thank you so much for joining me today for this movie party; it means sooooo much to me that you took time out of your schedules,” she said, adding Heather is like a “second mother” and Thomas and Casey “sure know how to make me laugh.”

Megan’s cancer returned again in January, and she’s been going through chemotherapy at Masonic since late February, completing the third of six rounds this month.

Before COVID-19 interrupted routine hospital visits, O’Brien often stopped in to hang out. He had to come prepared … to be punked.

Outside the room, Casey has to be ready for the hand sanitizer container to be filled with whipped cream. With sticky hands, he then had to go to the room’s sink only to find out too late the basin covered in Saran Wrap and the water slashed on his shirt.

From the bed, Megan roared in laughter.

The Wagners also produced gags involving a fake mouse, which, like spiders, Casey can’t stand. “We have a lot of fun,” Casey said. “She is a prankster. … They get me with everything.”

At the shaded entrance to Tampa General Hospital, O’Brien stood in front of a throng of reporters days before the Outback Bowl and broke news that he was cancer-free for a stunning fifth time. Then he joined a few teammates and some Auburn players inside the stadium to cheer up other kids battling illnesses.

Back in Minnesota after the game, O’Brien’s cancer had quickly returned a sixth time. He boomeranged back to Masonic as a patient.

During his journey, O’Brien has inspirited thousands as the keynote speaker at the Big Ten kickoff luncheon in Chicago last July and he impacted more people when his story was featured on ESPN’s “College GameDay” show before the Gophers’ win over Purdue in September.

In October, O’Brien made his collegiate debut holding a series of successful extra points in the blowout win over Rutgers. From his belt dangled a white towel with black marks for the times he had beat cancer. There were four Xs then.

Since O’Brien’s fifth and sixth battles came so close together, and the last one was under the radar, he has decided to play with the numbers a little bit.

Like the previous bouts with cancer, O’Brien attacked this latest one aggressively. He opted for the more potent IV chemo instead of taking chemo pills. He kept his 18-credit course load and maintained his offseason workouts with teammates. Weighing 180 pounds, he felt the strongest he’d ever been.

“I thought, if we are going to do anything, we might as well get after it,” the redshirt junior said.

On Monday, doctors gave O’Brien a good bill of health — not a great one — saying there are still concerning spots in his lungs. They are now doing two-month checkups, instead of their previous three-month routine.

For all the recognition O’Brien has received, including the Disney Spirit Award at the College Football Awards show in Atlanta in December, he doesn’t look to prominent people he has rubbed shoulders with for motivation.

“When anyone asks who I take inspiration from, those are the first two names I say,” he said of Megan and Brax. “I don’t take a whole lot of inspiration from other athletes or public figures. It’s entirely those two.

“They are going through the same things that I did at a younger age (and are) doing it with a smile and doing it in a way that is inspiring their families and inspiring a state. (With them) being on a platform at 10 years old, it makes me want to get up and do more for the cancer community for them.”

Barber can relate. When the Wagners and Flecks were talking at the “Row The Boat” picnic last summer, Barber approached and reached for his wallet.

“He says, ‘Look what I still have. I carry it with me every single day,’ and it was the quote (card) that we gave him,” Andrea said. “He says, “Every moment that I feel down, I look at this quote.’ ”

Then a few weeks ago, when O’Brien went in for his last chemo treatment at Masonic, the Battaglias drove from Blaine to greet Casey for only a few seconds when he got out of his car at 7:30 a.m. When Casey was done, the Wagners had slipped out their hospital room to wish him well in the lobby.

The knitting on the Gophers’ cancer community grows tighter.