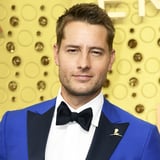 Justin Hartley appears to be moving on from his split from Chrishell Stause with actress Sofia Pernas. On Friday, Us Weekly confirmed that the former Young and the Restless costars are dating after photos surfaced of the two kissing in LA. Although Justin and Sofia have yet to address the reports themselves, Justin and Sofia have known each other for quite a few years now as he previously played Adam Newman on the CBS soap opera and Sofia portrayed Adam's nephew's girlfriend Marisa Sierras.

Related:
Chrishell Stause and Justin Hartley's Split Is Still a Bit of a Mystery, but Here's What We Know

Interestingly enough, Chrishell also starred on the series as Bethany Bryant and that's actually how she and Justin first met. After working together on the show, a romance blossomed between them and they wed in October 2017. However, in November 2019, Justin filed for divorce, citing "irreconcilable differences." According to reports, their separation was a "big surprise" to everyone. Though details about what really happened are still pretty scarce at the moment, it looks like we'll get to find out more in the upcoming third season of Chrishell's Netflix show, Selling Sunset, which premieres on Aug. 7.