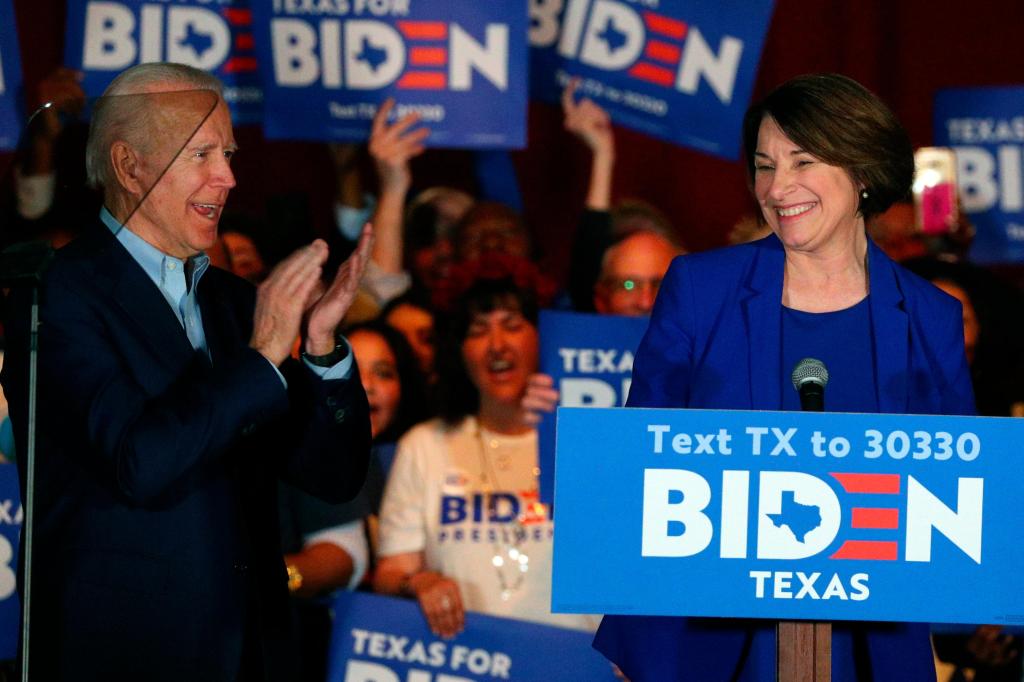 Rep. James Clyburn, D-S.C., told reporters that while he believes Klobuchar is “absolutely” qualified to be vice president, “This is very tough timing for her.”

Klobuchar, D-Minn., was a prosecutor years ago in the county that includes Minneapolis. As she was leaving the post to join the Senate, an officer involved in this week’s death of George Floyd was involved in the death of another man. The officer ultimately was not prosecuted.

Clyburn, who said his view was his “gut feeling,” played a pivotal role in helping Biden become the party’s all-but-certain presidential nominee. Clyburn is the No. 3 House Democratic leader and Congress’ highest-ranking black lawmaker.

“So often in politics, timing really dictates things, Barack Obama I don’t think could have gotten elected four years before he got elected,” Clyburn said of the former president during a conference call. “And I don’t know whether he could get elected today.”

On MSNBC, Biden said the tensions in Minnesota have “nothing to do with my running mate.”

Pressed on whether Floyd’s killing increases pressure to place an African American woman on his ticket, Biden said he’s talked about putting women of color on the Supreme Court and in his Cabinet. “And I also already said that there are women of color under consideration,” he said.

Clyburn helped revive Biden’s badly flagging presidential campaign earlier this year, lifting him to a decisive triumph in a South Carolina primary in which large numbers of voters were black. That fueled a Biden run to a string of victories in other state contests that resulted in his becoming the party’s presumptive nominee.

Before being elected to the Senate in 2006, Klobuchar, who is white, was prosecutor of Minnesota’s largest county, which includes Minneapolis.

While Klobuchar was in that job, more than two dozen citizens died during encounters with police but none of the officers involved were criminally charged. Most victims were people of color, according to data compiled by Communities United Against Police Brutality and news articles reviewed by the AP.

An officer involved in one of the past fatal incidents was Derek Chauvin, who was arrested and charged Friday in this week’s death of Floyd. A video showing Floyd complaining that he could not breathe as Chauvin kneeled on his neck has helped spark unrest in cities around the country.

Chauvin was among six officers who fired on and killed a man in 2006 who reportedly stabbed two people and then aimed a shotgun at police. The case went to the grand jury after Klobuchar had been elected to the Senate and had left the county attorney’s office.

Klobuchar did not respond to a request by The Associated Press for an interview on Friday. But she told MSNBC that reports stating she had declined the case involving Chauvin years ago were “absolutely false.”

Klobuchar and 27 other Democratic senators wrote a letter Friday to the Justice Department’s Civil Rights Division, asking it to investigate “patterns and practices of racially discriminatory and violent policing” by the Minneapolis police.

When pressed late Friday on the potential impact of Clyburn’s comments on her vice presidential prospects, Klobuchar told CNN, “I just can’t do politics tonight.”

“I have so much respect for Rep. Clyburn and in the end, Joe Biden was a great vice president,” she said. “He’s going to make the best decision on whoever he wants to govern with.”

AP reporters Sara Burnett in Chicago and Will Weissert in Washington contributed to this report.