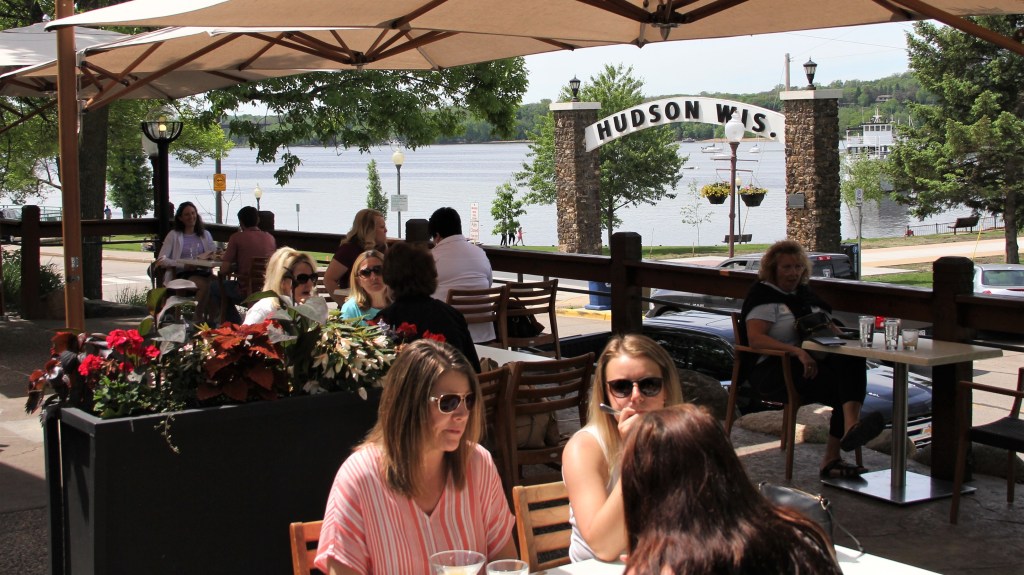 Many Wisconsin businesses — including bars and restaurants — have opened in the two-plus weeks since that state’s Supreme Court struck down Gov. Tony Evers’ stay-at-home order May 14. A number of eateries in border towns such as Prescott, River Falls and Hudson are open for dine-in business, providing landing spots just across the St. Croix river for Minnesotans yearning for a drink and/or meal out on the town.

It’s not unusual for Minnesotans to cross the border for dining, especially as the weather improves. Hudson restaurant operator Pete Foster sees a big influx of Minnesotans each summer. But the staff at his local restaurants estimated up to 95 percent of their customers were first-time visitors in the first week of business after reopening.

“I think what we’re seeing is just an increase in those guests coming to us,” Hudson Chamber of Commerce and Tourism Bureau president Mary Claire Olson Potter said, “because of what is happening in Minnesota, as their restrictions aren’t quite as lifted as ours are.”

Wisconsin currently has no state-wide restrictions. Pierce County and St. Croix County have promoted CDC safety guidelines, but made no mandates. Decisions are being left in the hands of the restaurant owners.

A few businesses in Hudson opened as soon as the stay-at-home owner was overturned. The first weekend they were open was described by some as a little chaotic. But a number of restaurants and bars in town waited to open as they welcomed back staff and put plans in place in an attempt to provide a safe dining experience for both customers and employees.

Foster — the owner of San Pedro Cafe, Pedro’s del Este and Barker’s Bar in Grille, all located in downtown Hudson — and Pier 500 owner Andrew Kron both put safety measures in place such as removing tables — indoors and out — to maintain proper distance and also mandate employees to wear masks, among other precautions. Foster has been in constant communication with the city, the chamber of commerce and the county health department.

Foster noted there have been some “bad examples” of how to re-open in Wisconsin, including in Hudson. Those places tend to draw attention and make Wisconsin look like “the wild west.” But he insists those businesses represent a small percentage of the whole.

“Most of the restaurant operators that I know, especially in Hudson here, are very responsible,” Foster said, “and they want to do the same thing that we’re doing.”

That’s what Jarvis said he witnessed as he drove through the downtown area.

In an effort to escape their current home renovation in Shoreview, Larry and Diane Cardinal made their first trip to downtown Hudson last Thursday, where they enjoyed lunch while overlooking the river on Pier 500’s patio.

“If Minnesota would’ve been open, we wouldn’t have come here,” Diane said.

Jarvis knows that’s the case for many Minnesotans. He owns three restaurants in Afton — the Afton House Inn, CURRENT and Swirl Wine shop and bar, and is frustrated with the state’s approach to re-opening restaurants. Minnesota restaurants were allowed to open with limited outdoor seating Monday. That is not a solution, Jarvis said.

“It is an illusion,” he said. “And the illusion is causing … folks of Minnesota to take their friends and families to other states, period. It is an exodus.”

“You see a lot of Minnesota plates on the Wisconsin side and they are having a great time at bars and restaurants and everywhere else,” said Tom Reid, the owner of Tom Reid’s Hockey City Pub in downtown St. Paul. “That’s where they are spending their weekends. They certainly aren’t on West Seventh Street, because there is nothing for them to go to.”

Jarvis said there’s “no reason” Minnesota restaurants can’t feature “at least 60 percent occupancy” with indoor dining right now. He said his Wisconsin business, St. Croix River Cruises, will open in Hudson this week, with dinner boats at just under half capacity and safety protocols in place.

“People need to feel confident that the Minnesota restaurant operators that are health trained and certified by the health department,” Jarvis said, “are going to provide a safe and enjoyable and healthy atmosphere and environment.”

EXAMPLE TO THE EAST

Kron’s restaurant has had a constant flow of business since reopening just ahead of Memorial Day weekend. He said creating a “safe environment” has attracted people of all ages, even amid coronavirus concerns.

The exact impact the opening of Wisconsin bars and restaurants will have on the spread of COVID-19 remains to be seen. Pierce County had 22 positive cases as of May 18. That number jumped to 45 as of Monday. St. Croix County moved from 49 confirmed cases to 92 in that same timeframe.

Diane and Larry Cardinal are retired, and Diane said the couple showed up last Thursday with masks, wiped everything down and used hand sanitizer upon arrival at Pier 500. She said the restaurant did “a nice job” with its safety protocols.

“We have seen a lot of success doing it the right way,” Kron said. “By doing these simple practices of what we’re doing, we all win.”

Foster said it’s only natural people — especially Minnesotans — will find their way to Hudson for the first time during this period, and noted the city’s restaurants can be “an example” for states such as Minnesota as they begin to reopen.

Will the Cardinals be back to Hudson anytime soon?