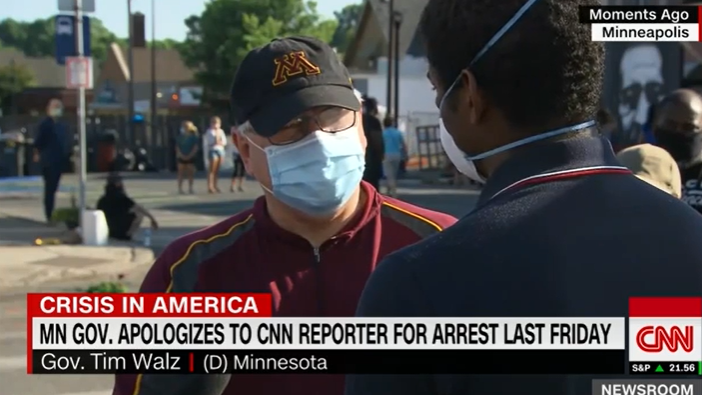 Minnesota Gov. Tim Walz Wednesday morning visited the Minneapolis site where George Floyd died while being arrested more than a week ago.

In a visit that was not announced to the media — and apparently not intended to be seen publicly — Walz, dressed in casual clothes with a University of Minnesota hat pulled over his face, ended up encountering CNN reporter Omar Jimenez, the same reporter whose arrest on live TV embarrassed Walz and the State Patrol before the nation.

Walz granted Jimenez a brief interview in which he apologized and explained why he felt the need to personally see the scene in front of Cup Foods on Lake Street, which has become a sort of sacred ground for the swells of protests and mourning that have sprung from Floyd’s killing in the custody of Minneapolis police.

“It’s very personal,” Walz said in the interview broadcast on CNN. “We wanted to try to get down here early, I’ll just say that, because I very much worry about white politicians appropriating black pain, and that’s certainly not it. … I have to personally and viscerally feel this. It’s unfortunate I’ve become friends with mothers only because their sons were killed.”

Walz has already apologized publicly and personally to CNN leaders for the arrest of Jimenez and his crew last week, but Wednesday’s encounter appears to be the first time the two have met.

“Thank you for the professionalism, thank you for understanding and I’m deeply sorry,” Walz said. “And you know that we’ve made other mistakes on this as far as making sure that you have access, but protocols and everything else, we’re learning, have to change because we have to create the space for you to tell the story.”