Kanye West Tweets That He's Running For President in 2020 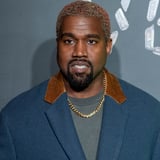 Is Kanye West heading down the campaign trail? On July 4th, the 43-year-old rapper tweeted that he is running for president in the upcoming 2020 election against Donald Trump - whom he has publicly supported in the past - and Joe Biden. "We must now realize the promise of America by trusting God, unifying our vision and building our future. I am running for president of the United States!" he wrote alongside the hashtag #2020VISION. Though Kanye didn't offer up any more details, it seems he has Elon Musk's vote. The CEO of SpaceX quickly replied to Kanye's tweet writing, "You have my full support!"

You have my full support!

Interestingly enough, this isn't the first time Kanye has talked about running for president. During the MTV Video Music Awards way back in 2015, he said that he would be running in the 2020 election during his speech for the Vanguard Award. Still, it's unclear whether he has filed paperwork to officially launch a presidential campaign.