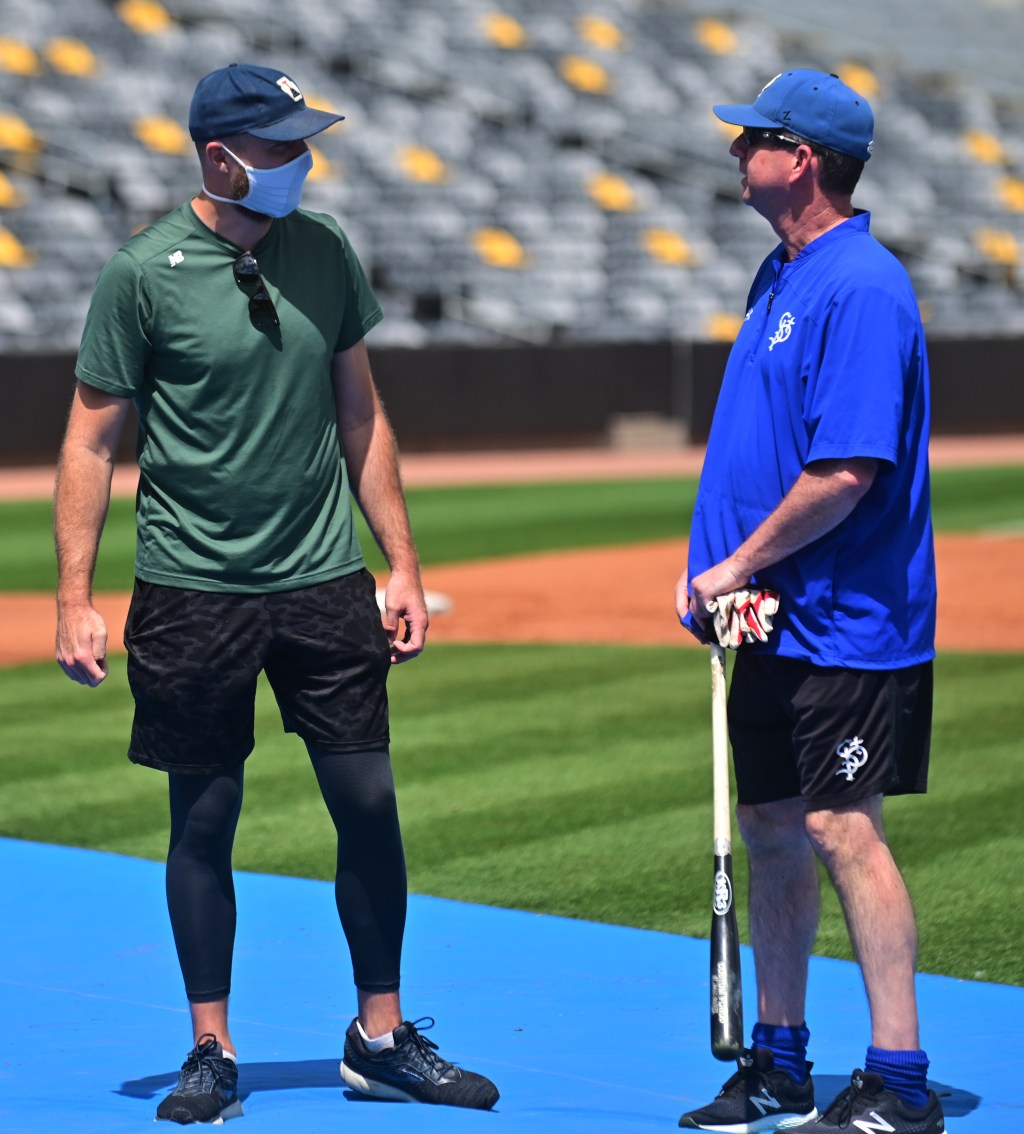 Neither the Minnesota Twins nor the St. Paul Saints talk much about it publicly, but discussions about the Saints partnering with the Twins have been ongoing.
The Saints, now conveniently housing the Twins’ 29-player taxi roster across town, would become a Triple-A affiliate if there were a partnership.
Estimated value of the Saints franchise is $25 million.

Geographically, a Double-A Twins-Saints affiliation wouldn’t work because the nearest Class AA leagues are the Texas League and Southern League. As for Class A, the Twins are set in Cedar Rapids, Iowa.

The Twins’ contract with Rochester expires this year. The Twins and Rochester have enjoyed a long relationship, but beginning next year, Major League Baseball wants affiliations to realign geographically. That probably would leave Rochester partnering with one of several eastern major league organizations.

A challenge for a Twins-Saints Triple-A team in St. Paul would first be acquiring a franchise. The Chicago Cubs’ Triple-A operation is in Des Moines, Iowa, in the Pacific Coast League.

Twins manager Rocco Baldelli said Friday that the Saints’ CHS Field is working well for his club’s taxi roster.
“It’s a really good setup over there for us for a lot of different reasons: One, the Saints organization, the ballpark itself, it’s a very professional operation. They’ve taken care of us and been very open-minded for things we’ve asked them for,” Baldelli said.
“Our players have also had to be open-minded because of everything going on, protocol-wise, precaution-wise. Our players are showering at the hotel, going back eating at the hotel, walking back and forth from the ballpark. So it’s taking away some of the amenities that they’re used to, but they’re willing to do that.
“But the setup over there is very good. We couldn’t ask for anything better certainly, and it’s definitely convenient, too, in a lot of ways just based on proximity to get guys here. Most teams don’t have this luxury. I think we’re pretty lucky.”

Bobby Bell, who had a 12-year hall of fame career as a defensive end-linebacker with the Kansas City Chiefs, was a quarterback as a Gophers freshman.
Of Chiefs’ QB Patrick Mahomes’ $503 million, 10-year contract signed last week, Bell, reached at his home in Kansas City,said, “I just wish I was playing quarterback now. I’m just about 30,40, 50 years early.”
Bell’s first contract with the Chiefs was for a guaranteed $150,000 for five years (1963-1967).

Bell, who turned 80 last month, said about Mahomes’ contract, “It’s great. Somebody’s got to take the money. I would take it, too. While I was playing for the Chiefs, I worked full-time at General Motors. I had to pay the bills, you know.”

Bell, due to COVID-19, said he hasn’t been in a restaurant since the Chiefs won the Super Bowl in February.
“You’ve got to be careful. You don’t know what’s out there,” he said.

Totino-Grace tight end Joe Alt chose Notre Dame over the Gophers after a lot of time at the family lake home last weekend. He decided to commit earlier than planned after weighing a number of considerations, among them the coronavirus pandemic.

The New York Mets have indefinitely postponed the No. 36 jersey retirement of Appleton, Minn.-born Jerry Koosman. The ceremony was to have been last month at Citi Field, but was deferred due to the coronavirus.
“Probably next year, I suppose, but I don’t know. You can’t get close to anybody now, so how are things going to change next year?” Koosman, 77, said from his home in Osceola, Wis.
Maybe a vaccine?
“Yeah, but who’s going to take that? Who’s going to be the first mouse?” said Koosman, won 20 games for the Twins in 1979.

Gophers baseball coach John Anderson figures pitcher Max Meyer, 21, who is on the Miami Marlins 57-player roster for the 60-game major league season and working with the taxi team in Jupiter, Fla., is nearly ready for the major leagues.
““I think you could put him out there in the bullpen and he probably would get a few guys out,” the hall of fame coach said.
Meyer is wearing No. 23 for the Marlins.

Some 680 golfers with required handicaps of 6.4 or lower attempted to qualify for this week’s 156-player Minnesota Amateur Championship at Edina Country Club.
Of those, 116 have handicaps better than scratch.
By the way, if a player isn’t better than a zero handicap for this tournament, it’s unlikely he’ll finish in the top 10.

Loyal “Bud” Chapman, the iconic Minneapolis golfer who died at age 97 last week, shot 76 last summer during a round at Southview Country Club, the 3,826th time he had bettered his age.
Bud said that years ago he had agreed to sell his copyrighted original “18 Infamous Golf Holes” paintings for $20 million, but the deal fell through.
His advice for golfers: “Enjoy the swing.”

The Casablanca Casino in Mesquite projects the Twins to win 36 of their 60 games.
A more informed pick would be 43 victories. The Twins’ sole opposition to get to the World Series is the Yankees.

That was comedian Larry “The Cable Guy,” 57, putting on a spectacular July 4 fireworks display at his Long Lake home near Rice Lake, Wis.

Meanwhile, beloved sports vendor Wally “The Beer Mn,” 85, is doing well after testing negative for COVID-19 three weeks in a row at his senior living facility in Plymouth.
Wally plans to return to Sneaky Pete’s in Minneapolis when the virus dissipates.
“There’s no crowds now downtown. I’ve got to have a crowd to work them,” Wally said.

Vikings wide receiver Adam Thielen was in 17th place, Kyle Rudolph in 66th early in the second round Saturday of the national celebrity golf tournament in Lake Tahoe.

Chris Meyer, 30, the former Edina and Wisconsin golfer playing on Europe’s Challenge Tour, is staying in Shoreview and practicing in the Twin Cities while waiting for Europe to reopen for Americans during COVID-19.

Ed Cassidy, a 1975 Simley High grad who coached his alma mater to the 1997 Class 3A state boys basketball championship, will become the Simley girls basketball coach next season.
For the last three seasons, Cassidy has been assistant men’s coach at Hamline University.

St. Paul Saints president Mike Veeck does a Capital Club Zoom on the morning of July 30.

It looks like a Vikings decision on whether to extend Dalvin Cook’s contract for what he wants won’t occur until just before training camp. At least one NFL agent is convinced the team won’t extend the running back, who is under contract for $1.3 million this year.
If Cook were to play this year for his $1.3 million deal, he could become an unrestricted free agent after the season but the Vikings could put a franchise tag on him for about $10.5 million for 2021.

It looks like it probably will take a $10 million-per-season deal to retain Cook beyond 2020. Former Vikings running back Teddy Brown’s highest season salary during eight years (1979-1986) in Minnesota was $330,000, a lot back then.
“That’s exactly what the guys who came before me were saying,” Brown said.

It still appears this could be the last season in Minnesota for Vikings coach Mike Zimmer, 64, unsigned beyond this year.
Offensive coordinator-assistant head coach Gary Kubiak, 58, would seem a likely successor if his health would allow and if he were interested.

The NFL has quietly told supporting team personnel, despite COVID-19, to plan to go ahead with the season

Tampa Bay’s Nick Anderson from Brainerd, Minn., is the fourth-best reliever in baseball, according to ESPN’s new rankings. Last season, Anderson overpowered batters, striking out 41 of the 78 he faced while walking just two.

Oakland’s Liam Hendriks, released by the Twins in 2013, ranks No. 5 on ESPN’s list. Houston’s Ryan Pressly, traded by the Twins two years ago for two minor leaguers, is No. 7.

Gophers women’s basketball coach Lindsay Whalen is buying hotdogs for the first 500 fans for her team’s home season opener, which will be announced for Nov. 5.

Twins Triple-A affiliate Rochester on July 1 furloughed nearly 80 percent of employees, who hope to return next season but now have uncertain futures in baseball.
The 2,000 Willians Astudillo bobbleheads the Red Wings planned to give away in a promotion this canceled season are being saved for next year.
Look for former Gopher Erik van Rooyen, 30, whose 315-yard driving average ranks No. 3 on the PGA Tour, to receive an exemption for the 3M Open July 23-26 at the TPC in Blaine.

Lehman’s son Thomas, 24, who caddied for his dad in the recent Colonial tournament in Fort Worth, Texas, has turned professional and is playing on the Outlaw Tour in Arizona. He was set to compete in the Mackenzie PGA Tour in Canada until it was canceled due to COVID-19.

The postponement of the Ryder Cup at Whistling Straitsuntil next year also means a postponement for owner Joe Gallagher’s St. Paul Doodle Productions, which produced segments of the 2016 Ryder Cup at Hazeltine National in Chaska. Gallagher has worked Ryder Cups since 1995.
“It means everybody will be safe this year and we’ll all be celebrating a USA victory in Wisconsin next year, just like at Hazeltine,” said Gallagher, who is headed to Orlando, Fla., this week to organize player logistics for the remainder of the NBA season and playoffs. He also has worked 19 NBA all-star games, including this season in Chicago.

The Whistling Straits pushback a year means Hazeltine National won’t get its next Ryder Cup until 2029.

It looks like Amir Coffey, who bypassed his senior season with the Gophers, will not make the LA Clippers playoff roster for the upcoming Orlando, Fla., games.

It will be surprising if Minnesota-Duluth coach Scott Sandelin, 55, who has led the Bulldogs to three NCAA championships, isn’t considered for the Wild vacancy.

Word is the Jacksonville Jags intend to move former St. John’s-Collegeville left tackle Ben Bartch, whose four-year contract he signed last week is worth $4.1 million, to guard because of what they consider his shorter arms.

Twins manager Rocco Baldelli, asked the chances, because of COVID-19, that baseball’s full 60-game schedule will be played this season and if he’s strategizing in case it isn’t: “If they tell us we’re not going to play, then at that point we’ll mentally kind of go in a different direction and start preparing for that. If we came to the ballpark truly pondering every single day and spending a lot of energy wondering about us not playing, it would really deter and take us away from what we’re trying to accomplish.”