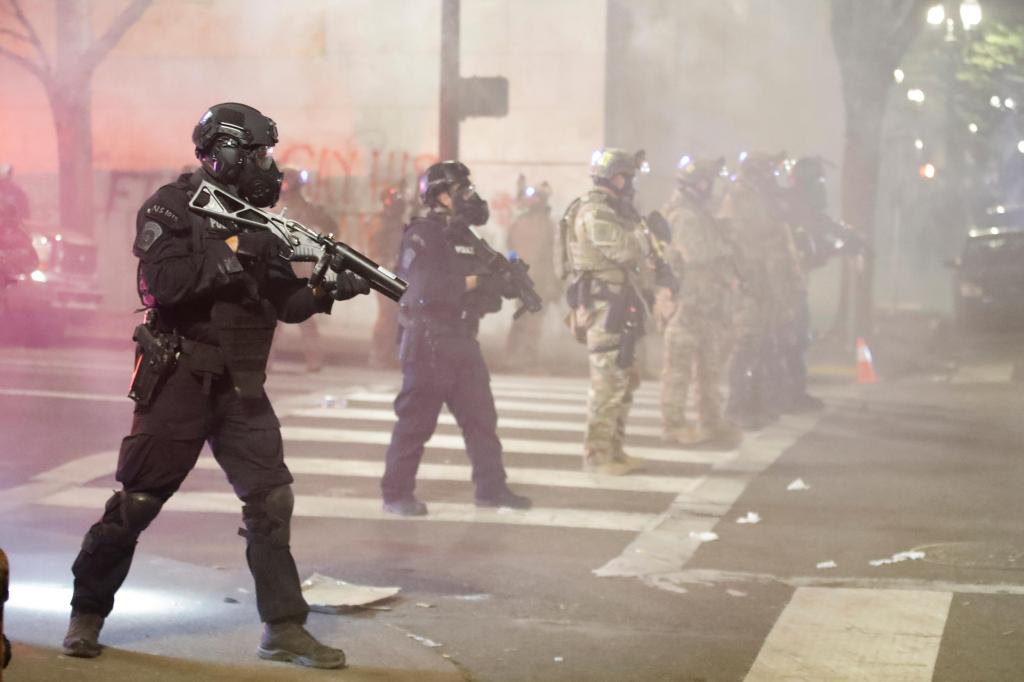 PORTLAND, Ore. (AP) — Two groups protesting U.S. agents sent to Portland by President Donald Trump to tamp down demonstrations outside a federal courthouse have sued the Department of Homeland Security, alleging it violated the Constitution by sending federal law enforcement to disperse crowds with tear gas and rubber bullets.

The Wall of Moms — a group of self-described mothers — and the Don’t Shoot Portland group filed the lawsuit late Monday against Acting Homeland Security Secretary Chad Wolf and other federal officials. The agency did not immediately respond Tuesday to a request for comment about the lawsuit.

Members of the group of mothers have “been tear-gassed night after night, left vomiting and unable to eat or sleep because of the toxic poison blasted at them,” the lawsuit said.

It claimed the tactics are unlawful and said the presence of the agents in Portland violates “a foundational principle of American democracy” because the agents are essentially performing local police duties that are reserved for state and local authorities.

The lawsuit was filed in U.S. District Court in Washington, D.C. after Portland’s mayor and the leaders of five other major U.S. cities appealed to Congress to make it illegal for the U.S. government to deploy agents to cities that don’t want them.

“This administration’s egregious use of federal force on cities over the objections of local authorities should never happen,” said the letter sent to U.S. House and Senate leaders from the mayors of Portland, Seattle, Chicago, Kansas City, Albuquerque, New Mexico and Washington.

Portland Mayor Ted Wheeler and City Commissioner Jo Ann Hardesty late Monday asked Wolf for a meeting to discuss a cease-fire and their desire for the removal of the extra federal agents deployed to Portland.

Protests have roiled Portland for two months since the death of George Floyd, the Black man who died May 25 after he was pinned by the neck for nearly eight minutes by a white Minneapolis police officer.

In Portland, the demonstrations have increasingly targeted the federal courthouse and protesters have tried almost every night to tear down a fence erected to protect the building, set fires in the street and hurled fireworks, Molotov cocktails and bricks, rocks and bottles at the agents inside.

“It is not a solution to tell federal officers to leave when there continues to be attacks on federal property and personnel,” Williams said. ”We are not leaving the building unprotected to be destroyed by people intent on doing so.”

Protesters filled the streets again into the early hours Tuesday, gathering for the 60th night on the city block where the courthouse is located. They were met with tear gas, pepper balls and stun grenades fired by the federal agents guarding the building.

Barr told members of the House Judiciary Committee at a much-anticipated election year hearing that the violence in Portland and other cities is disconnected from Floyd’s killing, which he called a “horrible” event that prompted a needed national reckoning on the relationship between the Black community and law enforcement.

“Largely absent from these scenes of destruction are even superficial attempts by the rioters to connect their actions to George Floyd’s death or any legitimate call for reform,” Barr said of the Portland protests.

The U.S. Marshals Service has lined up about 100 people who could be sent to hotspots, either to strengthen forces or relieve officers who have been working for weeks, agency spokesperson Drew Wade said.

Kris Cline, principal deputy director of Federal Protective Service, said an incident commander in Portland and teams from the Department of Homeland Security and Department of Justice discuss what level of force is needed every night.

Cline declined to discuss the number of officers currently present or if more would be arriving.

Cline said Portland police should take over the job of dispersing protesters from the courthouse area from the federal officers.

“If the Portland Police Bureau were able to do what they typically do, they would be able to clear this out for this disturbance and we would leave our officers inside the building and not be visible,” Cline said.

Portland police have also come under fire for using tear gas to disperse protesters before the federal agents began defending the courthouse. A federal court order has recently barred them from using tear gas unless the police declared a riot — which they have done on several occasions.

Wheeler, the mayor, is deeply unpopular with some Portland residents for what they see as his failure to rein in the local police.

Portland’s City Council is set to vote Wednesday on whether to send a ballot measure to voters in November that would create a review board for the Police Bureau that’s independent from elected officials and city departments. The police union opposes the idea and has called the move illegal.