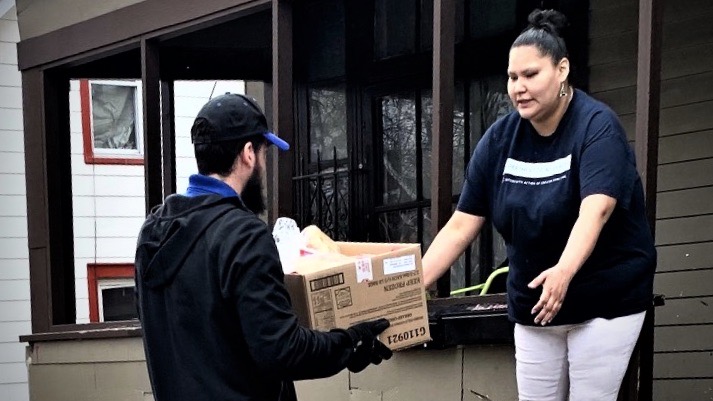 With the extra unemployment check boost coming to an end, Minnesota food charities say they are expecting to see a significant increase in demand.

Under the federal CARES Act coronavirus relied law, those receiving unemployment benefits were given an extra $600 weekly due to the COVID-19 pandemic through July 31. Food charities have already been seeing a surge in demand since the pandemic began, but are anticipating that demand to increase even further.

O’Toole said the end of extra unemployment benefits is the main driver of that projected increase, but the pandemic as a whole has created an exponential surge in food insecurity as well.

“That means one in eight Minnesotans, including one in five Minnesota kids, will not know where their next meal is coming from,” she said. “That means families are watering down milk, that means moms are skipping dinner to give their kids a little more.”

Loaves and Fishes, a food charity that provides meals across the state, has been offering curbside pickup since the pandemic started. They too are expecting demand for their services to increase once the extra unemployment benefits end.

The heightened demand will last for months, said Cathy Maes, executive director of Loaves and Fishes. Since the pandemic began, Loaves and Fishes has doubled the number of their locations and tripled the amount of meals they serve.

‘We’re talking a lot about making sure we have enough food on site,” Maes said. “This is going to be our new reality.”

The YMCA partners with food charities like Loaves and Fishes and is also anticipating the need for food to escalate.

In a normal year, the summer months are already a time when there is more food insecurity, as children are not in school where they can rely on meals, said Joan Schimml, YMCA senior director of communications and marketing.

Catholic Charities has seen a 200 percent increase in demand at its local food distribution sites, said Kathleen Turner, food services partnership and strategy manager for Catholic Charities of St. Paul and Minneapolis, in a statement.

That demand decreased once individuals began receiving extra unemployment benefits, but they anticipate that the demand will increase again now that the additional benefits are ending, Turner said in the statement.

In preparation for the expected increase in demand, Second Harvest is working with partners to ensure they have the resources they need, and are also setting up more emergency grocery pop up locations where community members can drive up to receive food.  Loaves and Fishes is ramping up their supplies, expanding locations and hiring more staff, and the YMCA is looking to extend and expand their partnerships with food distributors.

The food charities and providers said they are doing everything they can to meet the projected need.

‘This is going to be prolonged,” O’Toole said. “Our goal is to make sure this community thrives after we’re through this.”