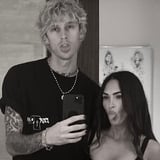 After much speculation, Megan Fox and Machine Gun Kelly are making their relationship official . . . Instagram official, that is! On Tuesday, the 30-year-old singer shared a black-and-white snap of him and the 34-year-old actress cuddling up and sticking out their tongues for the camera. "waited for eternity to find you again ... 🔪💫❤️🔪," he wrote alongside the photo. Based on that caption, it sounds like things are getting pretty serious!

The two first met on the set of their upcoming movie, Midnight in the Switchgrass, and sparked dating rumors in May following Megan's split from Brian Austin Green. Megan and MGK confirmed their relationship a month later when they were spotted holding hands in LA. Most recently, MGK gave us a little peek at their romance when he shared a video from their sushi date writing, "In love."