The Cast of Blue Crush Just Reunited, and Suddenly, I'm Looking For a Surfboard 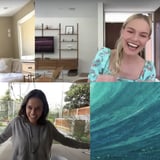 On Aug. 7, Kate Bosworth, Michelle Rodriguez, and Sanoe Lake had a virtual reunion to reminisce over their iconic 2002 film, Blue Crush. In a move that would make their Blue Crush characters proud, proceeds from the reunion supported the Surfrider Foundation, which is dedicated to the protection and enjoyment of the world's ocean, waves, and beaches.

Bosworth kicked things off by saying, "I get emotional seeing your faces," and I can't blame her; it's been 18 years since the film's release, and even I'm getting a little emotional seeing them all together again. When they weren't joking around or talking about how rough training for the film had been, they emphasized that even though they are all so different, the movie worked because it was "all love." To listen to what their favorite scenes were to film, on top of other ridiculous behind-the-scenes stories, watch the full video above.