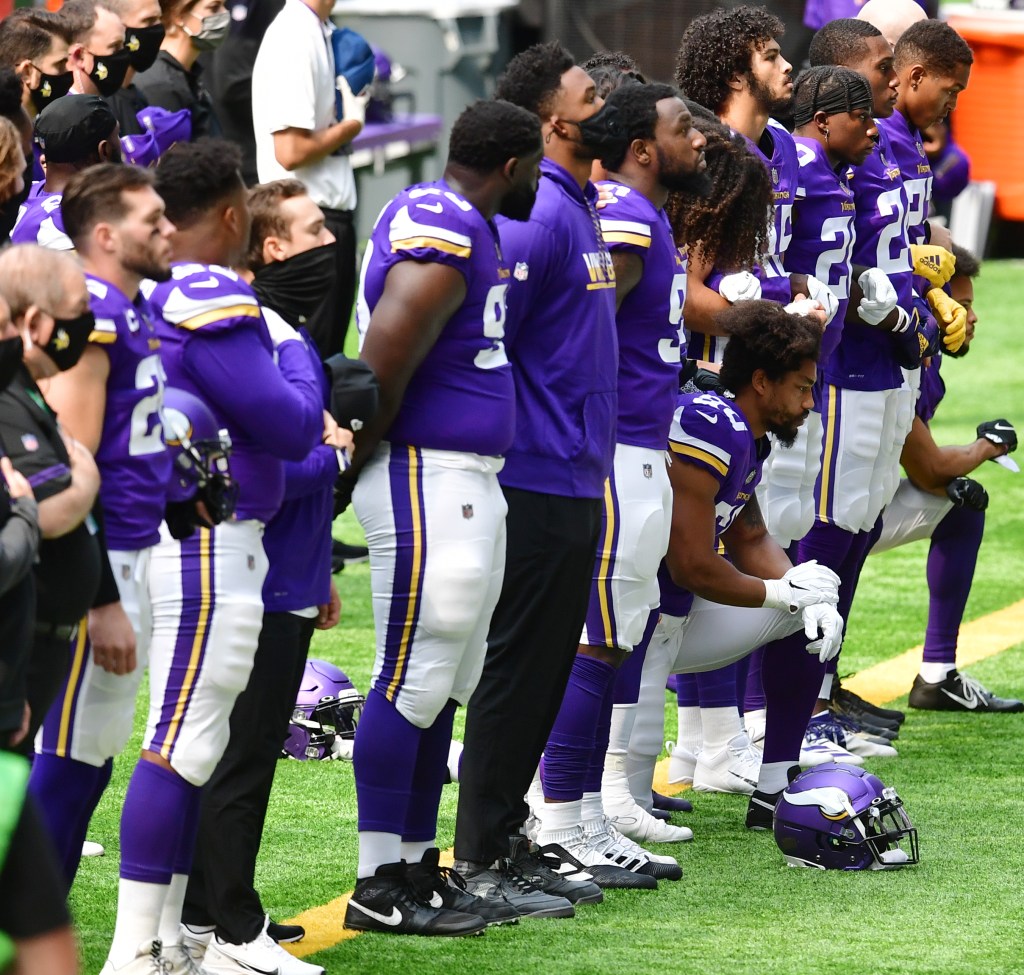 To bring attention to social justice issues in 2016, then-San Francisco quarterback Colin Kaepernick became the first NFL player to kneel during the national anthem. After that, the Vikings did not have a player kneel.

That is, until Sunday.

Meanwhile, the Packers elected to not come out of the locker room for the anthem held prior to a game in which no fans were permitted due to the coronavirus pandemic.

Playing their first game since the death of George Floyd on May 25 while in the custody of Minneapolis police, the Vikings honored the memory of Floyd, and had members of his family on hand. For the first time since 2007, the Gjallarhorn was not blown before a game.

“We recognize that George Floyd, along with many others, can no longer use his voice,” the Vikings said in a statement. “We hope in silencing the Gjallarhorn today we can continue to call attention to these silenced voices and collectively work toward a better, more just society.”

There were a number of social justice initiatives before a game that was played with “End Racism” written beyond one end zone and “It Takes All of Us” beyond the other. All of the Vikings players stood for a pregame recorded performance of “Lift Every Voice and Sing,” while the Packers remained in their locker room for that song as well.

Vikings coach Mike Zimmer said each player made his own decision on whether to kneel or stand during the prerecorded anthem.

“I knew that some guys were probably going to kneel,” Zimmer said. “That was up to them. That’s their decision, so it is what it is.”

Linebacker Anthony Barr, a member of the team’s 10-man social justice committee, said the group had discussed what players might do during the anthem.

“Everyone feels differently about kneeling or standing,” he said. “We didn’t want to alienate anyone and make anyone do something that made them feel uncomfortable. We wanted everybody to express themselves the way they felt they needed to, and we also wanted people to know we supported that decision. I think a couple of years back, kneeling was the worst thing you could do, and now if you stand, people have something to say about that.

“There’s always going to be people trying to divide from inside. But it was just however you feel about it, you should express it your way.”

The Vikings did not make any of the players Sunday who kneeled available to the media.

It wasn’t much of a Vikings debut for Yannick Ngakoue, the Pro Bowl defensive end acquired two weeks ago from Jacksonville.

Ngakoue started on the left side of the line and rotated with Holmes. While playing limited snaps, he had no tackles and one quarterback pressure.

“It’s a long season, so we’ll find out what kind of shape we’re in, what kind of game-readiness we are,” Zimmer said when asked about Ngakoue. “That was the plan.”

The Vikings elected to go with a four-man receiving rotation in Adam Thielen, Johnson, Sharpe and rookie Justin Jefferson, who caught two passes for 26 yards in his debut.

Also inactive were linebacker Ryan Connelly, an Eden Prairie native claimed Sept. 6 off waivers from the New York Giants, and rookies Ezra Cleveland at guard, D.J. Wonnum and James Lynch on the defensive line and Harrison Hand at cornerback.

The Vikings had six players on the 53-man roster inactive because game-day rosters have been increased from 46 to 48 and a new rule allowed them to elevate linebacker Hardy Nickerson off the practice squad for the game.

A day after signing a five-year, $63 million contract extension, running back Dalvin Cook had 12 carries for 50 yards and a 1-yard touchdown run that gave the Vikings a 7-3 lead in the first quarter. He also had one catch for minus-2 yards. … Rookie K.J. Osborn had two kickoff returns for 64 yards. He is also the punt returner, but the ball went out of bounds on Green Bay’s only punt. … The Vikings lost an opener for the first time since falling 20-3 at San Francisco in 2015; Zimmer’s teams are now 5-2 in openers.