I'm Canadian, and Here's How Schitt's Creek Winning 9 Emmys Made Me Feel 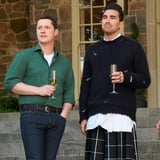 As a proud Canadian who happens to love TV and comedy, I've never had my eyes glued to the screen during the Emmys as much as I did during the show this past Sunday night. Of course, this is because Schitt's Creek - a local Canadian production - was nominated for 15 Emmys.

My family and I had watched Schitt's Creek in what I believe was record-setting binging time. Over the years, we fell in love with the characters and routinely say things like "How would Alexis act in this situation?" or "David would totally wear that" in real-life situations. We spent hours enjoying the show over dinner, after work, and on weekends together in a way that bonded us with one another over a shared love.

So when the team behind Schitt's Creek announced this past year that season six would be its final one, it felt like the end of an era. But, that sadness was quickly replaced with happiness when we found out the show was being nominated for a handful of Emmys. Alongside "happiness" you could add emotions of "excited" and "proud," and we couldn't wait to see the show be recognized - and hopefully awarded - for its incredible acting, writing, filming and production value, hairstyling, makeup, and costume design.

Related:
Rejoice! Netflix Confirms the Final Season of Schitt's Creek Will Be Available in October

When the Emmys started on Sunday, I found myself giddy with anticipation (and to be honest, thankful that the comedy category was the first category to be awarded - how long can you make a girl wait?). I was sitting on a couch in our den alongside my mom and dad, all of us smiling and enjoying the moment over homemade pizza and in comfy pajamas.

And what a sweet moment it was. When Jennifer Aniston announced that Catherine O'Hara won the first award for outstanding lead actress in a comedy series, we cheered, and I ran upstairs to tell my sister (who was working on a school assignment and wasn't able to join us to watch) the news that Schitt's Creek had won its first award. In that moment, I felt an overwhelming sense of pride to be Canadian because our lovely, hilarious, and quirky show won an award.

Given our reaction to O'Hara's award, you can imagine our reaction when the cast and crew began winning award, after award, after award . . . from lead actor, to supporting actor and actress, to outstanding comedy series! For a moment, it seemed to be unbelievable because it's never been done before, but Schitt's Creek swept the comedy category and made history doing it.

The experience of watching the cast and crew accept the awards, celebrate the wins, and be recognized at this scale was a moment that left me, my family, and I'm sure other Canadians who love comedy and TV, proud. Their win felt like our win, and the sense of camaraderie the show has created now has a permanent place in TV history.

And even though 2020 has been filled with its share of challenges, Schitt's Creek's accomplishments have been a light amongst the turmoil and difficulty. We're a resilient country filled with strong, loving people, and Schitt's Creek fully embodies that spirit.

To the cast and crew of Schitt's Creek: Thank you for representing us, congratulations on your wins, and just know Canada was right there cheering alongside you as you accepted your awards.