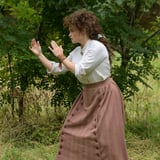 Netflix's Enola Holmes might not have the most perplexing puzzles, but it's enjoyable all the same. One of the central mysteries of the film, which premiered on Sept. 23, involves the disappearance of Enola's mother, Eudoria, who goes missing on the young detective's 16th birthday. Enola is left in the care of her older brothers, Sherlock (Henry Cavill) and Mycroft (Sam Claflin), with the latter being her guardian in the absence of Eudoria. When Enola discovers that Mycroft intends to send her to the dreadful Miss Harrison's Finishing School For Young Ladies, she runs away and embarks on a mission to find Eudoria, using a decoder card that her mother left behind for her to parse ciphers.

Throughout the movie, which takes place in 1884, Eudoria's leave is revealed to be tied to the suffrage movement. After Enola visits one of her mother's old friends Edith Grayston (Susan Wokoma), she remembers seeing Eudoria and Edith at an all-women meeting being held at their Ferndell Hall home. That recollection leads Enola to a deserted den at Limehouse Lane where the coterie appeared to have experimented with ammunition and dangerous devices. Enola also finds pamphlets about civil disobedience and flyers that describe suffrage assembly plans. One booklet includes an article about an explosion that previously took place at the offices of the Criminal Investigation Department in London. Evidently, Eudoria is involved in some very emphatic and commanding acts of dissent.

Amid her search for her mother, Enola becomes engulfed in another puzzle after meeting the young Viscount Tewksbury (Louis Partridge), who runs away from home and is being hunted down by a mysterious killer. By the time Enola solves that case, she's still left wondering where her mother is, hoping to see a coded message from Eudoria in the Gall Pall newspaper. That memo never comes, but Eudoria does reappear at Enola's lodging at the end of the movie. She says that where she went wasn't safe, affirming that she didn't leave out of ill will toward Enola. "I left for you because I couldn't bear to have this world be your future," she says. "So I had to fight. You have to make some noise if you want to be heard."

So why leave on Enola's 16th birthday? This might have been hinted at near the beginning of the film when Mycroft is mouthing off to Sherlock about Eudoria's disappearance and apparent embezzlement of funds that he sent over the years. He reveals that Ferndell Hall is technically his estate since their father died and he allowed his mother and sister to stay only because Eudoria asked to remain there until Enola turned 16. Perhaps Eudoria hoped that by then, the world would either be an acceptable place for Enola or her daughter would have at least become a strong and intelligent enough woman to fight against an oppressive system. The second turned out to be more of the case, so with that in mind, it's possible that Eudoria vanished to fight the good fight, knowing that Enola was more than capable of fending for herself. It seems like she could've at least waited until the day after Enola's birthday so that they could enjoy the special occasion together, but when revolution calls, you answer.