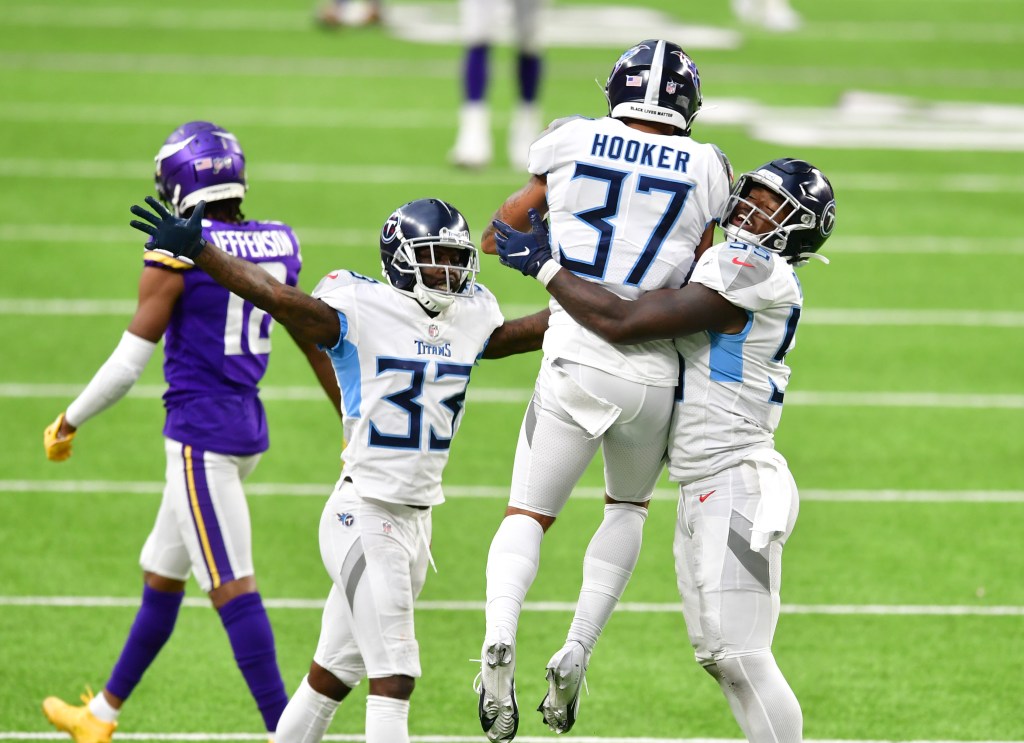 In 15 starts last year, Kirk Cousins threw six interceptions. He has matched that mark in just three games this season.

The Vikings quarterback threw two Sunday in a 31-30 loss to Tennessee at U.S. Bank Stadium. One was on a desperate long heave on Minnesota’s last offensive play of the game, but the statistics still say that Cousins is tied for the NFL lead in interceptions —and on pace for more than 30.

“Well, you just go back and look at each one, and you just say, ‘Why?’ ” Cousins said. “And you just try to better understand each one.”

Cousins’ first interception Sunday would have been a pick-six had it not been for an ill-advised penalty on Tennessee linebacker Jedeveon Clowney. On the first play of the second half, Cousins threw a short pass on the right side to Justin Jefferson, and Johnathan Joseph stepped in front of him and took it 31 yards to the end zone.

However, Clowney was called for an illegal blindside block on Jefferson. Both were well behind the play and Joseph would have scored had no block even been attempted.

“It was a blitz and the defensive end dropped and he was in the window of the throw, and I was really just wanting to throw it away over his head and put it out of bounds,” Cousins. “But the corner had vision … In hindsight, I wish I had just thrown it away farther.”

Cousins completed 16 of 27 passes for 251 yards and three touchdowns. He had TD passes of 16 yards to Adam Thielen in the first quarter, 71 yards to Jefferson in the third and a three-yard scoring toss to Kyle Rudolph early in the fourth that put Minnesota up, 30-25.

Cousins also had a first-half stretch of 10 straight completions. Overall, though, Vikings coach Mike Zimmer was displeased with the offense failing to move the ball on three of its final four possessions as the Vikings blew a 24-12 third-quarter lead.

“Those guys are all veteran guys, and I want them to take charge,” Zimmer said.

“We’ve got to keep full tilt, attack and know we are preparing as like the Vikings in the past,” said linebacker Eric Kendricks. “It’s no question we have our work cut out for us, but that’s all we can do is put our heads down and work.”

In his six seasons as an NFL starter, this is the first time Cousins has been on a team that started 0-3. He played for Washington from 2012-17, his last three seasons as the regular starter.

Asked how the Vikings can turn it around, Cousins said, “Keep working, practice hard and get ready for next Sunday.”

Chad Beebe was active Sunday for the first time this season and played in his first game since Sept. 22, 2019, when he suffered a season-ending ankle injury against the Raiders. He caught one pass for seven yards and had two fair catches on punt returns.

Inactive were receiver Tajae Sharpe, who played the past four seasons with the Titans, and rookie receiver K.J. Osborn, who returned punts and kicks in the first two games. His spot on kickoff returns was taken by running back Ameer Abdullah.

With Hughes and Dantzler out, the Vikings started Holton Hill and Kris Boyd as the outside cornerbacks and used Jeff Gladney in the nickel.

In the first game since linebacker Anthony Barr (shoulder) was lost for the season, Kendricks and Eric Wilson played regularly at linebacker and Hardy Nickerson was used in the base defense. Todd Davis is expected to become the third linebacker but had just two practices under his belt after signing with the team Thursday. Davis saw limited action Sunday and had a tackle.

Starting defensive end Danielle Hunter is on injured reserve and yet to play a game.

“We’re playing with a little bit of a short deck,” Zimmer said.

Minnesota had three turnovers to just one for Tennessee. The Titans’ came when safety Harrison Smith intercepted a Ryan Tannehill pass in the end zone on the first play of the second quarter. … Kicker Dan Bailey’s streak of 22 consecutive field goals made ended when he missed a 49-yard attempt wide right in the third quarter. … With second-year right guard Dru Samia continuing to struggle, former Vikings offensive lineman Jeremiah Sirles, who recently retired, tweeted Sunday, “I think I can still play RG.”

I think i can still play RG….#SKOL