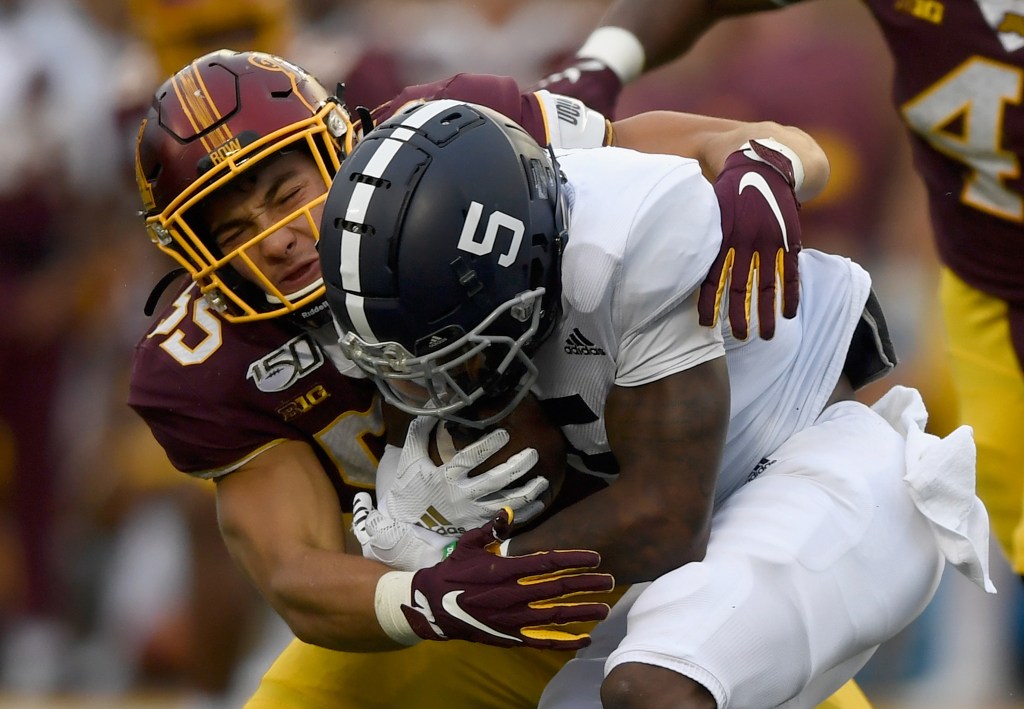 Mariano Sori-Marin knows some people considered him a “nerd.”

That’s fine by the Gophers’ middle linebacker, a Big Ten Distinguished Scholar as a finance major at the U’s Carlson School of Management. If it weren’t for Minnesota — his only Power Five scholarship offer — the Illinois native likely would have attended an Ivy League school.

Now a junior, Sori-Marin represents a changing of the guard in the middle of the Gophers’ defense. The local, household names are gone: Plymouth’s Thomas Barber, who made 37 starts in his career, and Kamal Martin, a Burnsville native who started 27. They combined to play 94 collegiate games.

A year ago, the Gophers asked Sori-Marin to play all three linebacker spots — strong-side, middle and weak-side. That experience in seven starts, and 25 games played overall, has set him up for the next step when 24th-ranked Minnesota kicks off the 2020 season against No. 19 Michigan at 6:30 p.m. Oct. 24 at TCF Bank Stadium.

“He’s one of, if not the most-intelligent player we have on our football team,” Gophers head coach P.J. Fleck said. “Not only that, I would probably rank him in the top three of who loves football the most.”

Sori-Marin, who’s grade-point average is above 3.7, said moving around to three positions helped him better grasp each defensive scheme’s strengths and weaknesses, the run fits and the coverage spots. He also has been tasked with being the defense’s chief player spokesman to media members since last spring.

“I felt like when I was able to put all three different positions together and get a full picture of the defense, it just helped me completely with my game,” Sori-Marin said.

Sori-Marin’s deeper understanding will be vital with more inexperienced players lining up next to him. Projected fellow linebacker starter Braelen Oliver is injured and could be out all season, which catapults two redshirt freshmen, James Gordon and Donald Willis, up the depth chart. They each played sparingly in four games a season ago.

Sori-Marin “is basically Joe Rossi Jr. on the field,” Fleck said in reference to the Gophers’ defensive coordinator.

A year ago, the Gophers were able to endure Sori-Marin’s early-season struggles. In the season opener against South Dakota State, he started in Martin’s place and struggled with his assignment responsibilities on multiple occasions.

“There were some mistakes, but I didn’t let those happen again,” Sori-Marin said. “I continued to study up on what my responsibilities were and make sure that I responded with elite process.”

The Gophers won’t have the benefit of breaking in players against lesser nonconference opponents this season, with a nine-game Big Ten-only schedule. Up first are the Wolverines, who tout imposing yet inexperienced 6-foot-5, 243-pound quarterback Joe Milton.

Sori-Marin pops off the roster himself. He’s 6-foot-3 and 235 pounds and has maintained the speed he possessed as a member of the Providence Catholic High School track team in New Lenox, Ill.

“He is a prototypical linebacker,” Fleck said. “He’s tough. He’s mentally tough. He’s physical. He can run. He will surprise you how fast he really is. He’s usually a step ahead of everybody else.”

Sori-Marin said when he struggled with assignment a year ago, Barber and Martin were there to pick him up with added film study.

“Sometimes you are going to line up from guys that are bigger, faster, stronger than you, but if you know what your responsibility is and can play at an elite speed and have that mental intuition of what is going to come next, it is only going to propel you in your game,” he said.

Sori-Marin’s game was stuck in neutral in high school. After impressing at wide receiver as a freshman scout team player on a state championship team, he broke his left collarbone as a sophomore and was limited to three games. As a junior, he snapped his right collarbone in preseason and took the field in only two games.

“It was devastating because you know how much he loves the game,” Providence Catholic head coach Mark Coglianese said. “To have that freak incident happen again, lightning striking twice, it was heartbreaking for him. But he was out at practice every day. He was like a coach for us out there. He helped run the prep teams. He would be in every film session and do whatever he could to help the team, knowing eventually he would be back.”

Sori-Marin had offers from Harvard, Yale, Penn, Cornell, Colgate, Brown and Western Illinois. Northwestern showed interest. He was considered the 27th-best player in the state of Illinois in 2018. “I wasn’t really thinking that I was going to get anything big,” he said. “I was just looking at academics at the time.”

At the same time, he said, “I knew what I was capable of doing.”

The Gophers saw how Sori-Marin projected and offered him before his senior year. He committed in April and was named all-state after a healthy season at both linebacker and running back.

“He fell in love with Minnesota and Coach Fleck and the things they do over there,” Coglianese said. “But I don’t know. Maybe if he had been healthy those couple of years he might have had more scholarships. … He might have gotten more recognition. He is a Big Ten-type player.”

Coglianese emphasized who Sori-Marin is off the field more than the impact he made on the football or track teams. “He is a great individual, very respectful,” he said. “He is a great representative of what you like to see in high school sports.”

Given how COVID-19 shut down spring practices after only a week, Sori-Marin led in a very 2020 way, setting up Zoom calls for linebackers or the defense.

“That was a way I could start my leadership,” he said. “Then once the summer came, we were without coaches for the entire summer basically. There were all player-led workouts, player-led captain’s practices, player-led film sessions, things like that.”

Sori-Marin mentioned senior cornerback Coney Durr and senior nose tackle Micah Dew-Treadway as two of the other leaders on a defense that must replace seven starters, including four NFL draft picks.