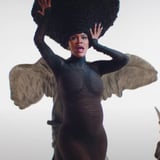 Teyana Taylor is taking us to new heights with her heavenly "Lose Each Other" music video. The singer debuted her gorgeous self-directed scenes for The Album single on Oct. 20, and the clips featured a special guest: Elton John. "Aside from her brilliant music, Teyana Taylor is one of the most visually dazzling artists in music today," John wrote on Twitter. "I am a huge fan so I jumped at the chance to be in her latest video 'Lose Each Other.'" These musicians make a powerful duo, and their partnership is a dream come true for them both.

"'Lose Each Other' is such a special record for me, and I wanted the visual to feel just as big," Taylor said in a statement. "I told my team 'you know what would be dope? If I could have Elton John open the video on the piano!!'" She continued, "Not that I thought it could really happen, but just putting it out there in the universe lol. So as we were working through treatment ideas and solidifying logistics for the video, an international phone number calls me . . . and for a second I almost didn't answer, but my intuition spoke, I answered. All I hear is . . . 'Hello darling, it's Elton. I'd LOVE to do your video!' I FREAKED OUT!"

It appears the video was filmed earlier this year, before Taylor gave birth to her daughter, Rue. She looks stunning as the focal point of almost every shot, with the exception of dancers Elishah and Maggy Van Dan Heuvel, and a few scenes with John. Check out the full video above to see Taylor and John's beautiful partnership.