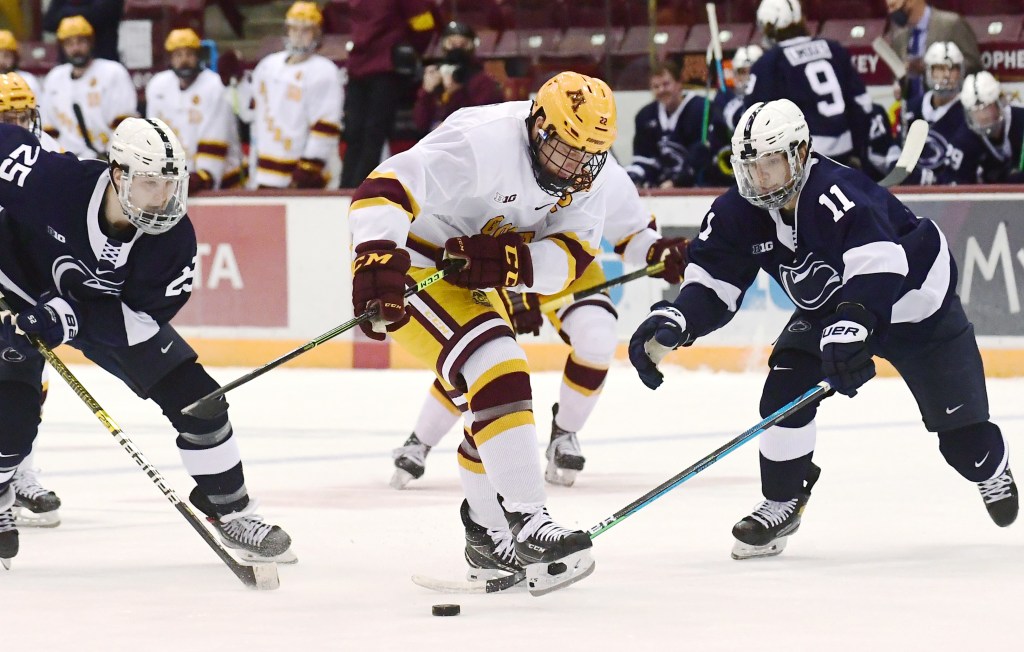 There are plenty of moving parts in a successful hockey team, and all of them have to click, on some level, to string together a collection of wins.

In Thursday’s season opener, the Gophers got their offense and their goaltending working.

In Game 2, they installed the power play and the result was a sweep. The Gophers scored on two of their three man-advantage opportunities on Friday afternoon, holding off Penn State for a 3-2 win to take both halves of their opening series.

Scott Reedy, Sammy Walker and Brannon McManus scored for the Gophers (2-0-0 overall, 2-0-0-0 Big Ten), who got 34 saves from goalie Jack LaFontaine in the win.

Christian Sarlo and Kevin Wall scored for Penn State, which is looking for an identity and offense after losing the bulk of its offense off a team that won the program’s first Big Ten title last season.

“It feels really good. I think we needed that,” said Walker, the team’s captain, reflecting on many tough nights vs. Penn State. “Just everyone in the room and as an organization to get back on top of these guys.”

It was a resilient effort by the Gophers, who never trailed and recovered quickly after sagging in the first period and seeing the Lions tie the game. “I give Penn State an enormous amount of credit tonight. They had fight in their game,” Gophers coach Bob Motzko said. “We got two timely power-play goals tonight that got us the lead and we were able to hold on. It was a dogfight.”

Making his first collegiate start, Lions freshman goalie Liam Souliere was busy right away when the Gophers got an early power play and Reedy maintained his goal-per-game pace.

Minnesota managed just two shots on the man advantage, but the second came with just a second left on the penalty, when Reedy softly redirected a pass from McManus between the rookie netminder’s knees for a 1-0 lead.

The Lions took over the momentum later in the period and tied the game, when Sarlo finished a 3-on-1 break with a shot past LaFontaine’s glove.

It looked like we would head to the first intermission that way, until Matt Staudacher found Walker with a long lead pass and the final seconds ticking away.

Several Gophers on the bench yelled for Walker to shoot, and he did, popping a low slap shot past Souliere with 0.8 seconds remaining for a 2-1 Gophers lead after 20 minutes.

“I got it back on the blue line and I looked up and there’s two seconds (remaining) so I tried to get it off as soon as I could,” said Walker, who led the team offensively last season. With fewer than 200 fans on hand, he heard plenty of voices urging him to get a shot off. “I think I heard everyone in the stadium. I figured it was a good time to shoot.”

McManus boosted the Gophers’ lead with the only goal of the middle period, on the power play, when he gave the hockey version of a head fake, looking like he was going to pass the puck to defenseman Jackson LaCombe, and instead ripping a shot past the goalie for a 3-1 lead.

The Lions’ Kevin Wall scored the only goal of the third period, but the Gophers’ penalty killers were also stout, holding Penn State without a man-advantage goal on the weekend.

“Tonight it was penalties that cost us. Not that we took a ton, but Minnesota did a great job of converting on the power plays we gave them,” said Penn State coach Guy Gadowsky.
Souliere finished with 24 saves for the Lions.

After a two-day break, the Gophers are back in action on Monday, Nov. 23, when they open a two-game home series with Ohio State.