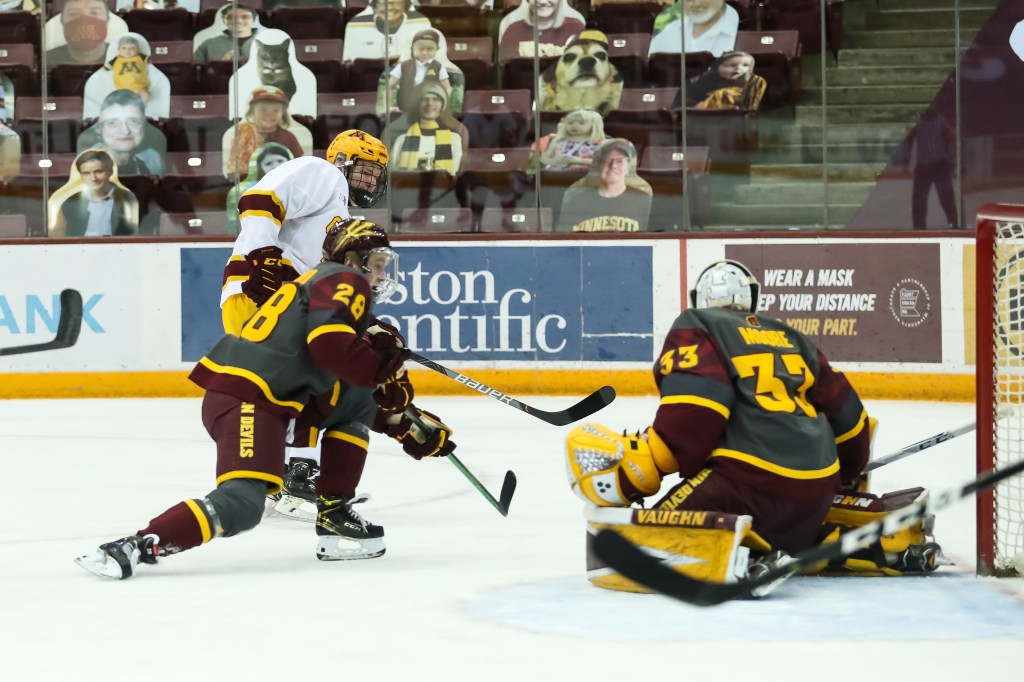 In a week filled with much discussion about putting the animosity of the past behind and finding unity, the Gophers men’s hockey team looked like it still had some anger to work out.

The Gophers lost at home last weekend, twice, in a pair of frustrating games and fell out of the nation’s top ranking spot as a result. That turned out to be a bad thing for Arizona State, which faced the Gophers’ wrath — and lots of their shots — on Thursday.

Paced by hat tricks from Brannon McManus and Sammy Walker, the Gophers blasted out to an early four-goal lead and never looked back, beating the Sun Devils 10-0 in their most lopsided game in nearly two decades.

The Gophers (12-3-0) put 52 shots on a trio of Sun Devils goalies, including a recently promoted member of the school’s club team who finished the game between the pipes. At the other end of the ice, Jack LaFontaine had 14 saves for his third shutout of the season.

“We had some orneriness to us,” said Gophers coach Bob Motzko. “We had an excellent forecheck. Our young (defensemen) were controlling the play, and Arizona (State), they’re banged up right now. Tonight was just not going to be a good night with a couple guys out for (COVID-19) protocol and a couple injuries. They’re still a really good team.”

The Gophers admit they were stung by a pair of losses to unranked Notre Dame last weekend, in which they managed just three goals. In sharp contrast, the pucks were rolling in versus an undermanned Arizona State team right from the get-go on Thursday.

Scott Reedy, a senior forward who had missed the previous three games due to injury, started things quickly, driving the middle of the ice and flipping a pass to Blake McLaughlin. It was the first of two goals McLaughlin would score on the way to a 4-0 lead.

“It was a little different there, playing wing, but I had to get my boots moving early,” said Reedy, who played right wing on a top line with Walker and McLaughlin. “I wasn’t out for too long and got a couple practices in so I felt all right. It’s nice playing with those two. McLaughlin and Walker make it easier.”

It was the Gophers’ largest margin of victory since a 12-1 win over Alabama Huntsville on Nov. 1, 2002, when Motzko was an assistant coach on a team that was on the way to its second consecutive NCAA title. For McManus, his second career hat trick came after a week of hard practice and a determination to bounce back.

“I thought we were better prepared, and we played Gopher hockey tonight and it was good. Full 60 (minutes),” he said.

The Sun Devils (5-12-2) started goalie Justin Robbins and gave him the rest of the night off after the Gophers had a 23-2 shot advantage in the opening period. Evan DeBrouwer came on in relief and allowed four goals, three by McManus.

In the third period, trailing 8-0, Powers put junior Bronson Moore in goal. Moore is a member of the Sun Devils’ club team and had never before played at the Division I level. He finished with six saves on eight shots.

“He had a great save on me. I wish I could have that one back,” Reedy said. “He looked good and looked like an athletic kid, and props to him for getting in there and playing his heart out.”

The series concludes Friday afternoon with a 4 p.m. faceoff. As good as his team looked in the opener, Motzko said their job is only half done.

“I always say ‘you don’t sing and dance until Saturday night,’ ” Motzko said. “I know we play Thursday-Friday but you’ve got to finish your job on the weekend, and we’ve got one big game to go yet.”