Sabrina Carpenter Kicks Off 2021 With Her New Song "Skin" 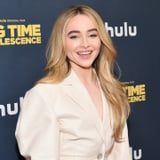 Sabrina Carpenter is starting the year by blessing her fans with a new single, and damn, we're hooked. The Work It actress teased the release of her latest single "Skin" several hours before it dropped at midnight on Jan. 22, with nothing but the time of the drop in her caption. We love an artist who knows how to keep us on our toes with anticipation!

The song has a sultry tone we've heard from Carpenter before, especially in her last EPs Singular: Act 1 and Singular: Act II. But rather than longing for love like she did in "Almost Love" or relishing the attention of her admirers in "Looking at Me," the songstress croons about someone getting under her skin. "You can try / To get under my under my under my skin / While he's on mine," she sings in the emotional tune.

The singer has been telling fans that she has big news for them in the new year, and if this new single isn't it, we might be on the lookout for another musical project! We are definitely ready for more music from her, so fingers crossed there's more coming in 2021! Listen to "Skin" above.

Related:
Sabrina Carpenter Is a Pop Legend in the Making, and These 37 Videos Prove It
﻿
Read The Rest at POPSUGAR Entertainment- (opens a new tab)