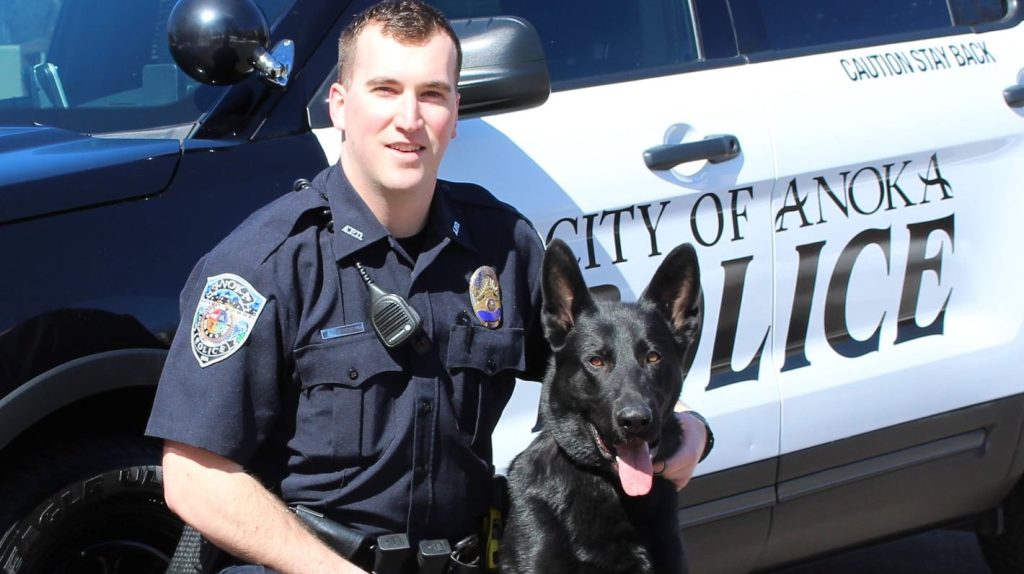 “Bravo has been released from the hospital and will go home to begin the healing process with his handler,” the department said in a Facebook post.

Following a vehicle pursuit of two men who stole two cars and exchanged gunfire with police: one suspect was killed, the other arrested uninjured, a Blaine police officer was hospitalized with minor injuries and Bravo was shot.

The shooting is under investigation and few details have been released.

For Bravo, police originally thought the black German shepherd may need surgery. However, after being seen by the University of Minnesota Veterinary Medical Center and the Blue Pearl Animal Hospital of Blaine, it was determined that surgery was not needed.

“The bullet nicked his trachea, and caused some soft tissue damage, but they believe it will heal on its own,” the department said.

Police responded to a report of a theft at Kohl’s parking lot at 10311 Baltimore St. in Blaine about 1 p.m. Sunday.

Upon learning that two male suspects had fled in a stolen vehicle, abandoned the vehicle at a nearby business and carjacked another driver at gunpoint, police pursued.

The suspects then fled north on Minnesota 65. The vehicle was disabled just north of Minnesota 107 near Braham and the men fled on foot.

Gunfire was exchanged; one man was killed and Bravo was injured.

The Minnesota Bureau of Criminal Apprehension was investigating.

“We want to thank the thousands of people who have wished K-9 Bravo well and have expressed their thoughts and prayers for his speedy recovery. We hear you and we feel your sadness and admiration for our friend and partner,” the Anoka Police Department said in a post that had been shared over 2,000 times. “K-9 Bravo is not only a partner to our Anoka Police Officers, he is our friend and has become the de facto therapy dog for the department.”

According to the department’s website, police dogs have been a part of Anoka’s force since 1967. Since then, 15 German shepherds have served. The current K-9 officer is Jake Sorteberg.