Half a million dead in US, confirming virus’s tragic reach 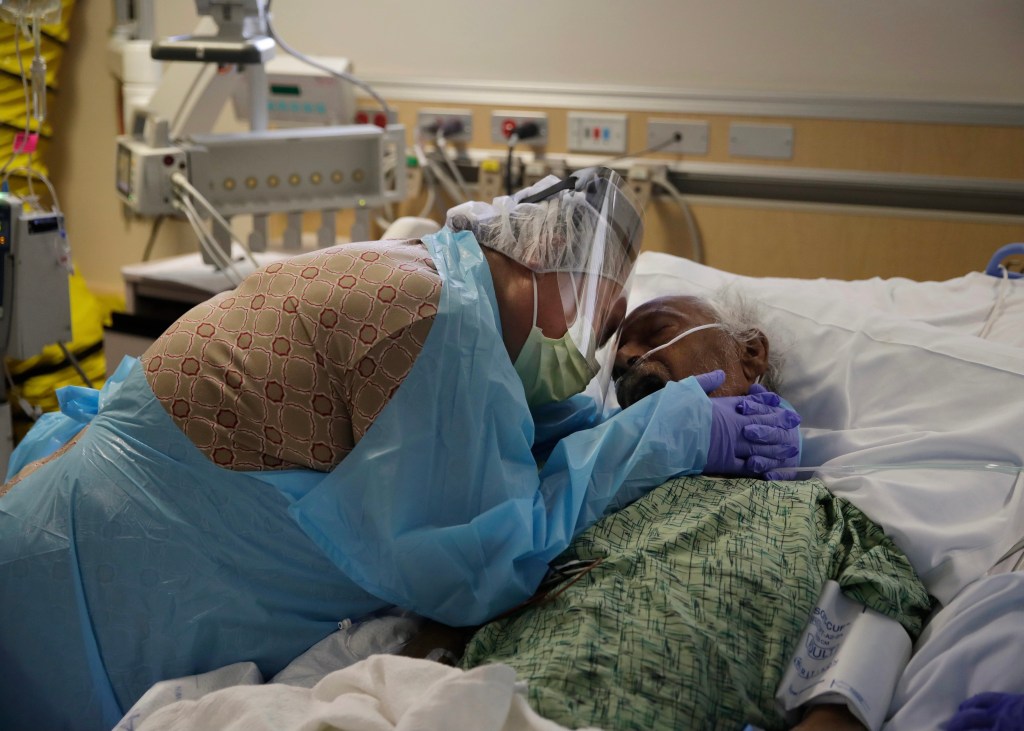 For weeks after Cindy Pollock began planting tiny flags across her yard — one for each of the more than 1,800 Idahoans killed by COVID-19 — the toll was mostly a number. Until two women she had never met rang her doorbell in tears, seeking a place to mourn the husband and father they had just lost.

Then Pollock knew her tribute, however heartfelt, would never begin to convey the grief of a pandemic that has now claimed 500,000 lives in the U.S. and counting.

“I just wanted to hug them,” she said. “Because that was all I could do.”

After a year that has darkened doorways across the U.S., the pandemic surpassed a milestone Monday that once seemed unimaginable, a stark confirmation of the virus’s reach into all corners of the country and communities of every size and makeup.

“It’s very hard for me to imagine an American who doesn’t know someone who has died or have a family member who has died,” said Ali Mokdad, a professor of health metrics at the University of Washington in Seattle. “We haven’t really fully understood how bad it is, how devastating it is, for all of us.”

Experts warn that about 90,000 more deaths are likely in the next few months, despite a massive campaign to vaccinate people. Meanwhile, the nation’s trauma continues to accrue in a way unparalleled in recent American life, said Donna Schuurman of the Dougy Center for Grieving Children & Families in Portland, Oregon.

At other moments of epic loss, like the 9/11 terrorist attacks, Americans have pulled together to confront crisis and console survivors. But this time, the nation is deeply divided. Staggering numbers of families are dealing with death, serious illness and financial hardship. And many are left to cope in isolation, unable even to hold funerals.

“In a way, we’re all grieving,” said Schuurman, who has counseled the families of those killed in terrorist attacks, natural disasters and school shootings.

In recent weeks, virus deaths have fallen from more than 4,000 reported on some days in January to an average of fewer than 1,900 per day.

Still, at half a million, the toll recorded by Johns Hopkins University is already greater than the population of Miami or Kansas City, Missouri. It is roughly equal to the number of Americans killed in World War II, the Korean War and the Vietnam War combined. It is akin to a 9/11 every day for nearly six months.

“The people we lost were extraordinary,” President Joe Biden said Monday, urging Americans to remember the individual lives claimed by the virus, rather than be numbed by the enormity of the toll.

“Just like that,” he said, “so many of them took their final breath alone in America.”

The toll, accounting for 1 in 5 deaths reported worldwide, has far exceeded early projections, which assumed that federal and state governments would marshal a comprehensive and sustained response and individual Americans would heed warnings.

Instead, a push to reopen the economy last spring and the refusal by many to maintain social distancing and wear face masks fueled the spread.

The figures alone do not come close to capturing the heartbreak.

“I never once doubted that he was not going to make it. … I so believed in him and my faith,” said Nancy Espinoza, whose husband, Antonio, was hospitalized with COVID-19 last month.

The couple from Riverside County, California, had been together since high school. They pursued parallel nursing careers and started a family. Then, on Jan. 25, Nancy was called to Antonio’s bedside just before his heart beat its last. He was 36 and left behind a 3-year-old son.

“Today it’s us. And tomorrow it could be anybody,” Nancy Espinoza said.

By late last fall, 54 percent of Americans reported knowing someone who had died of COVID-19 or had been hospitalized with it, according to a Pew Research Center poll. The grieving was even more widespread among Black Americans, Hispanics and other minorities.

Deaths have nearly doubled since then, with the scourge spreading far beyond the Northeast and Northwest metropolitan areas slammed by the virus last spring and the Sun Belt cities hit hard last summer.

In some places, the seriousness of the threat was slow to sink in.

When a beloved professor at a community college in Petoskey, Michigan, died last spring, residents mourned, but many remained doubtful of the threat’s severity, Mayor John Murphy said. That changed over the summer after a local family hosted a party in a barn. Of the 50 who attended, 33 became infected. Three died, he said.

“I think at a distance people felt ‘This isn’t going to get me,’” Murphy said. “But over time, the attitude has totally changed from ‘Not me. Not our area. I’m not old enough,’ to where it became the real deal.”

For Anthony Hernandez, whose Emmerson-Bartlett Memorial Chapel in Redlands, California, has been overwhelmed handling burial of COVID-19 victims, the most difficult conversations have been the ones without answers, as he sought to comfort mothers, fathers and children who lost loved ones.

His chapel, which arranges 25 to 30 services in an ordinary month, handled 80 in January. He had to explain to some families that they would need to wait weeks for a burial.

“At one point, we had every gurney, every dressing table, every embalming table had somebody on it,” he said.

In Boise, Idaho, Pollock started the memorial in her yard last fall to counter what she saw as widespread denial of the threat. When deaths spiked in December, she was planting 25 to 30 new flags at a time. But her frustration has been eased somewhat by those who slow or stop to pay respect or to mourn.

“I think that is part of what I was wanting, to get people talking,” she said, “Not just like, ‘Look at how many flags are in the yard today compared to last month,’ but trying to help people who have lost loved ones talk to other people.”