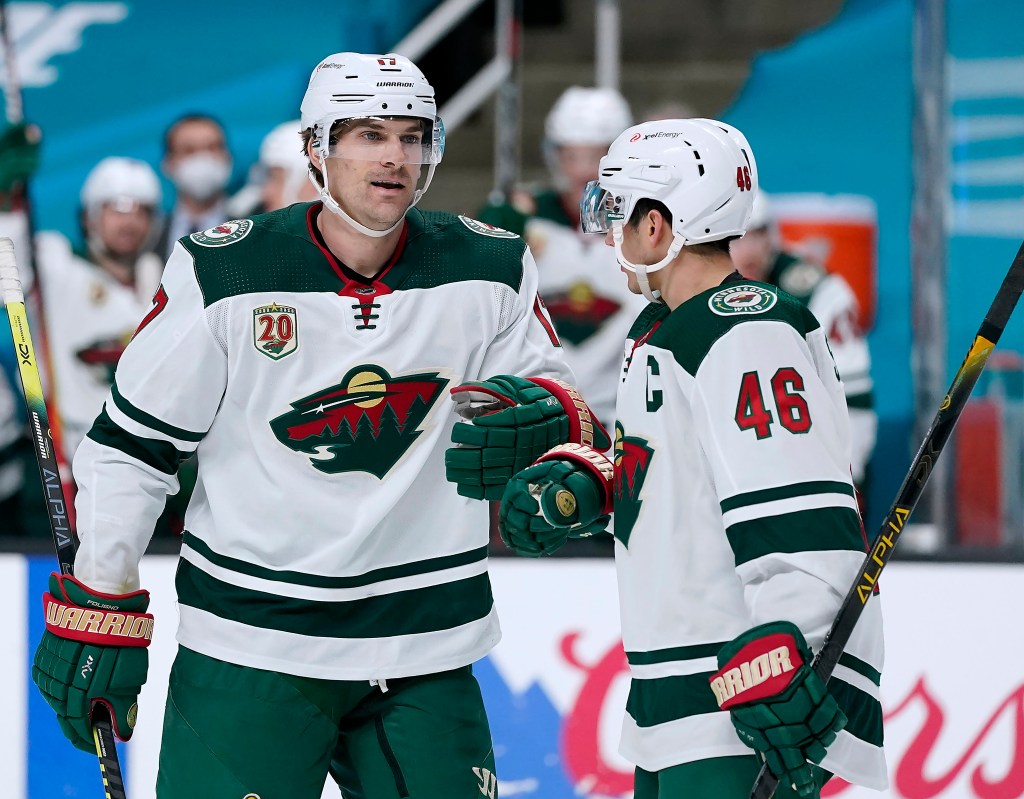 In a lot of ways, Wild winger Marcus Foligno pummeling Sharks defenseman Nikolai Knyzhov was a microcosm of Monday’s game at SAP Center.

The only difference was Foligno graciously called the fight with Knyzhov after drawing blood, whereas the Wild poured salt in the wound en route to a 6-2 rout of the Sharks.

All of a sudden Wild have won three games in a row for the first time this season and are steadily climbing in the West Coast division. Maybe more importantly, the Wild are getting production from up and down the lineup, and don’t appear to be slowing down anytime soon.

Just look at the stat sheet from Monday’s game. It had a little bit of everything.

Not only did Foligno nab a Gordie Howe hat trick with a goal, an assist, and a fight, Mats Zuccarello continued to impress with a four-point night, and Victor Rask chipped in with a three-point of his own. If that wasn’t enough, rookie sensation Kirill Kaprizov scored a goal, and the Wild even converted on the power play for the second straight game.

“I think the group has confidence,” coach Dean Evason said. “You feel good about yourself when you can score goals and defend as well.”

It marked the second game in a row that the Wild got tremendous production from the Kaprizov-Rask-Zuccarello line. They have a combined 14 points in that span.

That said, it’s more than the Kaprizov-Rask-Zuccarello line for the Wild right now.

“We have four lines going right now,” Zuccarello said. “Any given night it’s a different line going. That’s good for the team. It makes us dangerous when we have different lines going every night. That’s nice to see.”

As dominant as the Wild were throughout the game, it was a disastrous start as Brent Burns stunned his former team with a goal 45 seconds into the contest. That made it 1-0 in favor of the Sharks before most players on the bench even had a chance to hop over the boards.

Luckily for the Wild, they battled back in a hurry with a flurry later in the first period. It started with a nifty goal from Zuccarello to make it 1-1 and continued a mere 11 seconds later with a tap-in goal from Kaprizov to make it 2-1

That put the Wild in the driver’s seat and they never looked back.

Heck, even when Knyzhov tired to get the Sharks going by dropping the gloves late in the first period, Foligno quickly put an end to the fight with a couple of haymakers. He actually stopped throwing punches at one point and called the linesman over so he didn’t do any more damage.

“I caught him with the first one and the second one made him bloody,” Foligno said. “I know he’s a young kid and probably didn’t know the fighting aspect of it. I just thought it was enough.”

That helped the Wild feel good heading into the second period and Ian Cole increased the lead to 3-1 with a rising shot that beat goaltender Martin Jones. Then, after getting credited with an assist on Cole’s goal, Foligno completed the Gordie Howe hat trick later in the second period with a a fluttering shot to make it 4-1.

“Our line was all over it tonight,” said Foligno, who played alongside Ryan Hartman and opposite Zach Parise. “We made more plays. I made more plays to help those guys out. Just felt a little better with the puck tonight.”

That goal effectively chased Jones from the crease, and while Logan Couture helped the Sharks cut the deficit to 4-2 later in the second period, the Wild squashed any hopes of a comeback with a goal from Jonas Brodin to make it 5-2.

That paved the third period where the Wild continued to dominate play before Rask added an empty-net goal to finalize the score at 6-2.

“It’s nice to kind of pull away,” Foligno said. “I thought we made some great play and it’s clicking for us right now. It’s a good feeling right now to score. It’s something that we have to continue.”