Bruno Mars and Anderson .Paak's Supergroup Is on the Way to Spread Joy and '70s Tunes 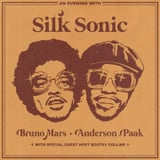 A new supergroup is upon us! On Feb. 26, Bruno Mars and Anderson .Paak announced they would be joining forces to form a new band, Silk Sonic. Their debut single will be out March 5, and the charismatic artists will later release a full-length album, An Evening With Silk Sonic, which was also done in collaboration with legendary funk musician Bootsy Collins.

This is the first official collaboration for Mars and .Paak, although they previously toured together when .Paak was the opening act for Mars's 24K Magic World Tour in 2017. "We locked in and made an album," Mars wrote on Instagram. By the looks of the announcement art, shown below, the project appears to be borrowing inspiration from the 1970s - not surprising given Mars's famously anachronistic style.

Stay tuned for more news on Silk Sonic, and look out for their single dropping next week.