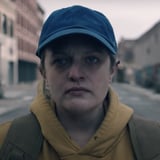 It's been almost two years since The Handmaid's Tale was officialy renewed for season four and, finally, we have a proper first look at what the next installment will bring. Season four picks up where fans left off, with June having escaped to Canada from Gilead and the whispers of war building up to a crescendo. "We don't hide. We fight," June tells her allies in the trailer as they set off a violent resistance against Gilead's oppressive society.

It looks like the biggest conflict of the season will be between June and Aunt Lydia, as the older woman is shown demanding June be brought to her and the two seemingly battle amidst increasingly brutal clashes between the Resistance and Gilead's forces. Watch the trailer and be ready for the fight when the dystopian drama returns on April 28.