Recall of Gov. Gavin Newsom to decide future of California 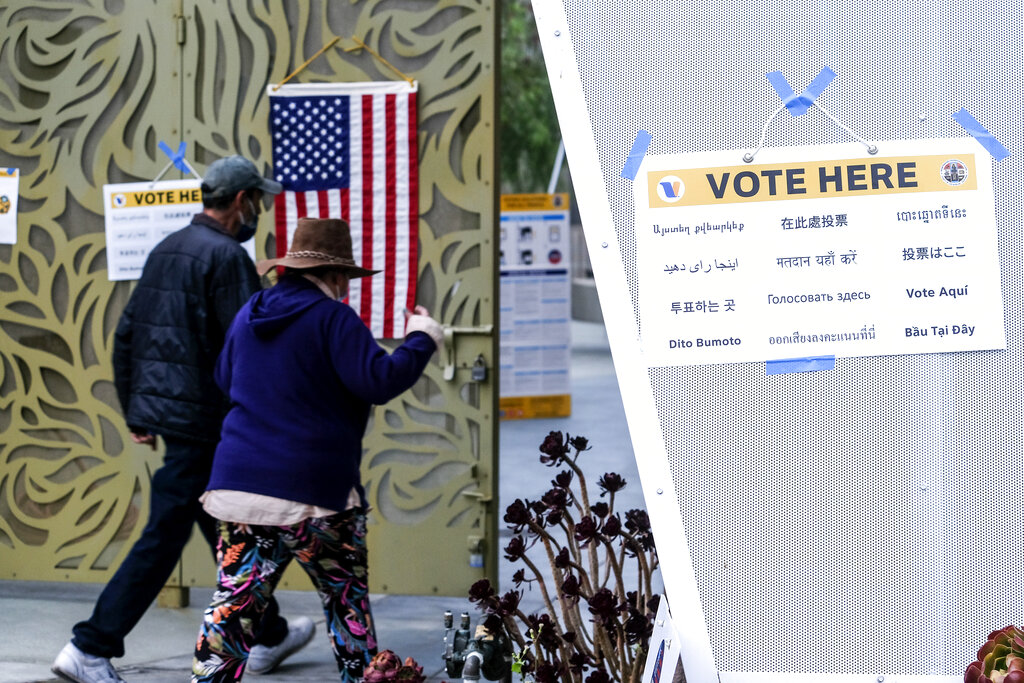 SACRAMENTO, Calif. (AP) — Voting wrapped up Tuesday in the California recall election that could kick Gov. Gavin Newsom out of office, a race that hinges on how voters have judged the Democratic governor’s response to the coronavirus pandemic and determines if the nation’s most populous state will veer in a more conservative direction.

Newsom is just the fourth governor in U.S. history and the second in California to face a recall. He was elected in a landslide less than three years ago and would be up for reelection next year if he survives the bid to oust him.

“I’m feeling good, as long as we can get out that vote,” Newsom said after greeting volunteers in San Francisco earlier in the day.

Voters were asked two questions: Should Newsom be removed from office, and, if so, who should replace him? The ballot had 46 names to choose from, but much of the attention has focused on Republican talk radio host Larry Elder, who is seeking to become California’s first Black governor.

The results will be read for clues heading into the the 2022 midterm elections, when control of Congress will be in play again. The party that controls the White House historically loses seats in midterms.

If Newsom loses, it would be a stunning rebuke by voters in a state where registered Democrats outnumber Republicans nearly 2-to-1. It also would be an embarrassment for national Democrats after President Joe Biden joined Newsom the day before the election and cast it as a chance for Californians to show the nation that “leadership matters, science matters.”

Elder said in an interview Tuesday evening with Fox News host Sean Hannity that he was feeling confident about Republican turnout for in-person voting. Mail-in voting has been going on for roughly a month and has favored Democrats. Republicans hoped their voters would show up in force at polling places.

This recall was fueled largely by anger over Newsom’s actions during the pandemic, which included imposing the nation’s first statewide shutdown order. Critics said he was heavy-handed, shuttering businesses and keeping children out of classrooms for longer than necessary. Newsom said his actions saved lives.

“I am angry. It should be a freedom of choice. What is this? A dictatorship?” asked Janet Webb, a 69-year-old from the San Francisco Bay Area city of Lafayette who voted for Elder.

She said squabbles over Newsom’s handling of the pandemic have split her family and friends and may prompt her to move out of state.

“I can’t live here like this if they’re going to force everyone to get a vaccine,” Webb said.

The state has mandated vaccinations for health care workers and is requiring vaccinations or regular testing for school employees and state workers.

“We’re in the middle of a pandemic. Why would we recall the governor who has been really trying to curb the spread of the virus?” the San Diego social worker said.

Mendoza said she thinks the effort to unseat him is a backlash by a small minority of Republicans in a firmly Democratic state. She does not believe Newsom brought the recall on himself by attending a birthday party at an upscale Napa Valley restaurant last fall in violation of his own administration’s coronavirus rules, a decision that drew heavy scrutiny.

“This is ridiculous. We just got Trump out. We don’t want a Trump puppet,” she said.

Newsom’s advisers expressed increasing confidence that the governor would survive the effort to drive him out more than a year before the end of his first term.

In recent days, Elder suggested the results of the recall election could be skewed by unspecified “shenanigans,” echoing Trump’s baseless claims of voting fraud in the 2020 presidential race.

There has been no confirmed evidence of widespread fraud. Elder’s campaign website has linked to a “Stop CA Fraud” site where people can report allegations of fraud. Earlier language alleging Newsom had already won due to fraud has been removed.

Newsom said he would accept the election results and urged Elder and others to do the same.

“As an American, I’m ashamed. I’m disgusted by it. Stop. Grow up. These people literally are vandalizing our democracy and trust in our institutions,” he said.

Asked to provide evidence of any suspicious voting activity, Elder spokeswoman Ying Ma said the campaign wants “every proper vote to be counted” and “whatever shenanigans there are will not stand in the way of him becoming the next governor.”

This story has been corrected to show that Briana Mendoza does not think Newsom’s meal at an upscale restaurant led to recall effort.