Gophers running over opponents, but arch rivals have walls ready 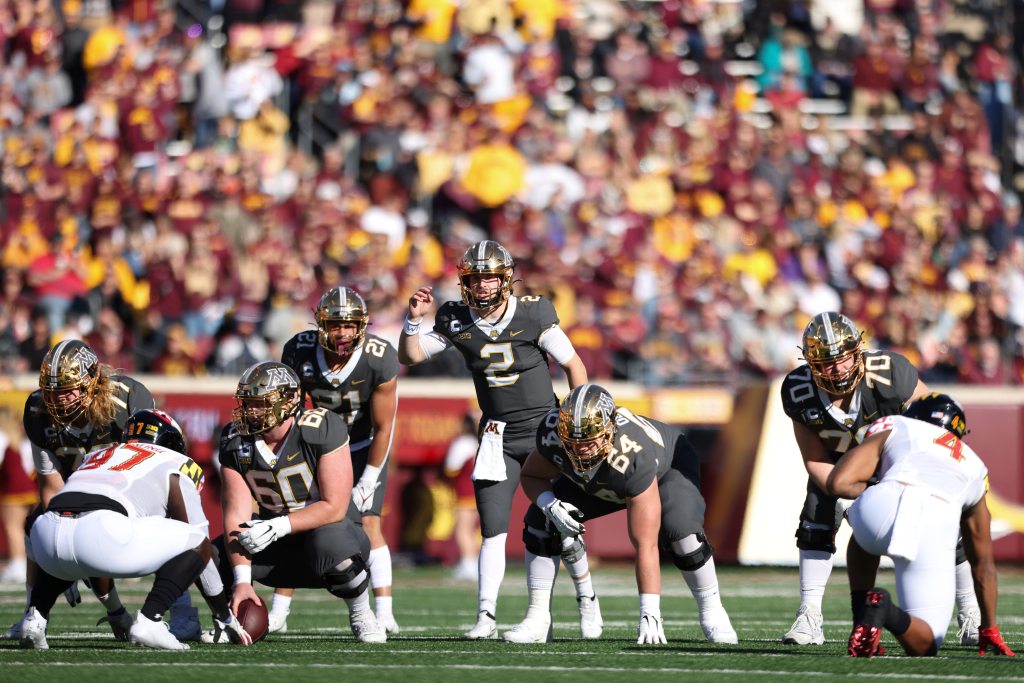 While the New York Jets linebacker has been away from the Gophers football program since he was drafted in 2019, he predicted earlier in the week the outcome and method in which Minnesota would beat Maryland on Saturday.

In a social-media gimmick from the NFL team, current Jets/former Terrapins running back Ty Johnson had 15 seconds to first say why he felt his college team would win the Big Ten game.

In a false start, Johnson got the head-to-head record wrong and then asked, “Who’s scared of a Gopher? Not me. Our ‘M’ is better on the flag. And ‘Row the Boat,’ but you capsized years ago.”

Cashman declined to get into any funny business about mascots, and while a retort about small freshwater turtles was on a tee, Cashman didn’t venture into that, helmet colors or slogans.

“You notice he barely even spoke about football?” Cashman said in his 15-second case. “But we’ve got a stronger culture, you know? Culture builds championships. Experienced offense, great offensive line, and I don’t know if you’ve seen our running game, but I don’t think you guys are physical enough to stop us on defense. That’s it.”

Up front, Cashman’s alma mater wore down Maryland’s D with 326 rushing yards on 58 carries, 5.8 per rush in a 34-16 win. QB Tanner Morgan completed eight of 12 passes for 125 yards and didn’t throw a pass in the final 25 minutes as Minnesota ran the ball at will on the final 23 offensive plays.

“A big philosophy on our offense is body blows,” said Olson, who set a program record with his 52nd career start. “Around the third quarter is when we like to see that there is going to be a little bit more give there on the line as we are continuing to lean on them. I thought that’s what we did.”

Gophers head coach P.J. Fleck has established a reputation for building a heavy running team and that has continued despite top running backs Mo Ibrahim and Trey Potts going down with season-ending injuries in the first five games.

On Saturday, true freshman Mar’Keise Irving had 21 carries for 139 yards and a touchdown, and Ky Thomas, in his second year, had 15 for 105 and a TD.

Kieft gave credit to running backs coach Kenni Burns, Ibrahim and Potts for “what they do in that room and how they lead those guys. They are playing at a really elite level and I don’t have a doubt in my mind that any three of them (including Bryce Williams) are going to go in and give their best effort.”

Before Saturday’s game, Fleck said athletics director Mark Coyle came into the coach’s office and shared how he felt it would be a good day to run the ball. That doesn’t exactly make the AD Nostradamus. Despite having neither Potts nor Ibrahim for the first time this season against the Cornhuskers last week, Minnesota still ran the ball on 63 percent of snaps. It was a season low, but that shot up to a season-high to 81 percent against Maryland.

The Terrapins were coming off a bye week and linebacker Ruben Hyppolite II said they, at times, knew what was coming. “We called the runs and knew the formations they were getting into,” he said.

It didn’t matter much.

Maryland coach Mike Locksley was asked about what makes Minnesota’s three running backs hard to stop. “It’s not really who’s running the ball for them,” he said. “It’s who they have up front.”

On Saturday, Williams, who had 127 yards versus Nebraska last week, added 48 yards and a TD, while wildcat quarterback Cole Framer contributed 30 yards and another TD.

Iowa and Wisconsin play on Saturday in Madison, Wis.

Minnesota’s vaunted rushing attack, which ranks 18th in the nation with 218 yards per game, will have to go up against the Hawkeyes rushing defense, fifth in the country, and the Badgers’ unit, which leads the nation in fewest yards allowed.

Cashman will likely remain confident in his former program come November, but those will be a massive test and could be much bolder predictions.