Silk Sonic Performed "Fly As Me" and "Smokin Out the Window" at the Soul Train Awards - Watch! 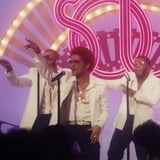 From the retro-inspired outfits to the mesmerizing dance moves, Silk Sonic's latest performance is giving us real Soul Train energy! A week after opening the 2021 American Music Awards, the soulful group consisting of Bruno Mars and Anderson .Paak made their Soul Train Awards debut on Sunday night. Backed by a live band, they kicked off the show with a flawless performance of "Fly As Me" from their debut album, An Evening with Silk Sonic. Per usual, they pulled out all the stops, but the icing on the cake? The backdrop resembling a vintage Soul Train set! They took the stage again to close the show with a surprise performance of "Smokin Out the Window."

The dynamic duo scored three nominations this year - including song of the year and the Ashford and Simpson songwriter's award. By the end of the night, Silk Sonic took home awards for the latter and video of the year for their No. 1 hit, "Leave the Door Open." Relive their "Fly As Me" performance above, and check out their "Smokin Out the Window" performance below!