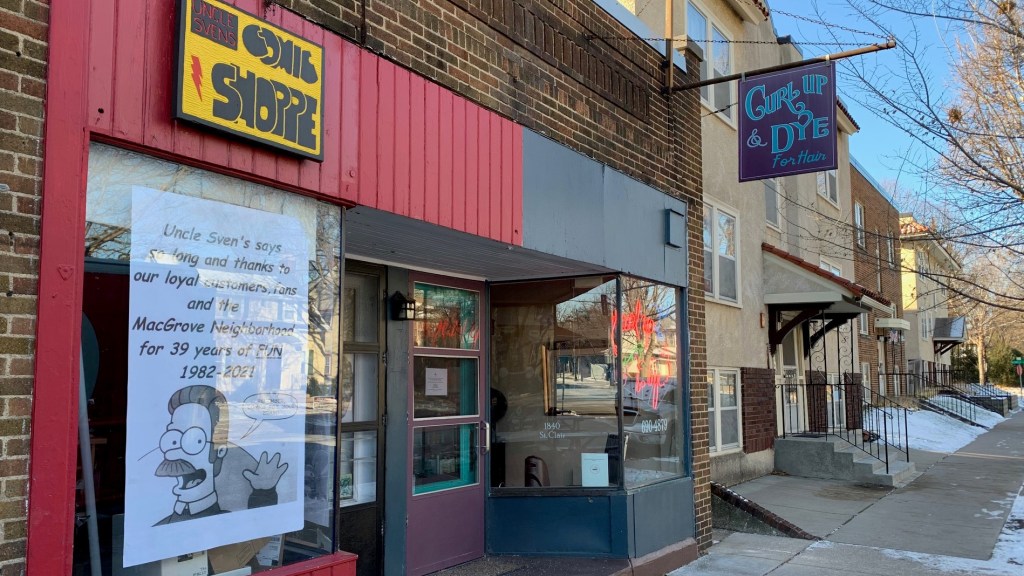 Uncle Sven’s Comic Shoppe opened on St. Clair Avenue near Fairview Avenue in 1982 when popular comics sold for 60 cents apiece, about one-seventh of what they cost today.

More than one set of customers met in its narrow stacks, fell in love and married. A customer once walked down the wedding aisle with a store clerk. Interest in comics and trading cards rose and fell and rose again over 39 years of sales.

The narrow bookstore closed this month, without fanfare beyond an oversized storefront window poster of the Simpsons’ cartoon neighbor Ned Flanders waving goodbye.

“Uncle Sven’s says so long and thanks to our loyal customers, fans and the MacGrove Neighborhood for 39 years of FUN, 1982-2021,” reads the black-and-white poster.

“They did not renew our lease for the building,” Brynildson said. “They gave us three months notice. Right now we don’t really have any plans whether we’re going to move it or not. It was kind of a surprise. It’s the holiday season. We’re retail. There’s not enough time to sit down and think about it.”

“Nobody’s going to lose their job or anything, but after 39 years, I was hoping to make 50 years there. That’s optimistic,” said Schmidt on Tuesday. “I’m going to be 70 years old next month.”

The Blue Plate Restaurant Company, which owns the Groveland Tap next door and the building housing its two retail neighbors, plans roof repairs and other improvements that will complicate access to the three sites.

Kathy Golden, proprietor of the longstanding hair salon Curl Up and Dye, also lost her lease and will close shop Dec. 30. She will rent a chair at the Rouge Salon on Selby Avenue beginning Jan. 3.

“I have been there for 38 years,” said Golden, who learned of her shop’s imminent closure by phone. “(In September) they said they were going to do work on the building, and they would like us out by Thanksgiving.”

Golden said the comic shop has been an icon in the neighborhood.

“It’s really awful that the comic shop is leaving,” Golden added. “It’s just been an (awful) two years with the pandemic. I would have liked a couple more years there. I am going to ask for my $190 deposit back that I made 38 years ago.”

“We are currently in the process of planning and preparing to make needed repairs and upgrades to our old and historic building,” Shimp said. “A significant portion of our planned upgrades will require us to bring our building into updated compliance related to the Americans with Disabilities Act, and other local code requirements. The timeline of our project is subject to the city, available contractors and the materials needed for the project. We will keep our guests and neighbors updated throughout the process.”

During the past week, neighborhood residents on Facebook speculated on the building’s future, predicting an expansion of the Groveland Tap or demolition of the building for new uses.

Shimp did not elaborate on what might fill the Uncle Sven’s and Curl Up and Dye spaces, but she said Facebook rumors were just that — rumors.

“Despite what you may have read … we are NOT razing the building, putting in 440 apartments and a drive-through Starbucks,” Shimp said.