Austin Hays becomes the sixth Orioles player to hit for the cycle, doing so in six innings vs. Nationals 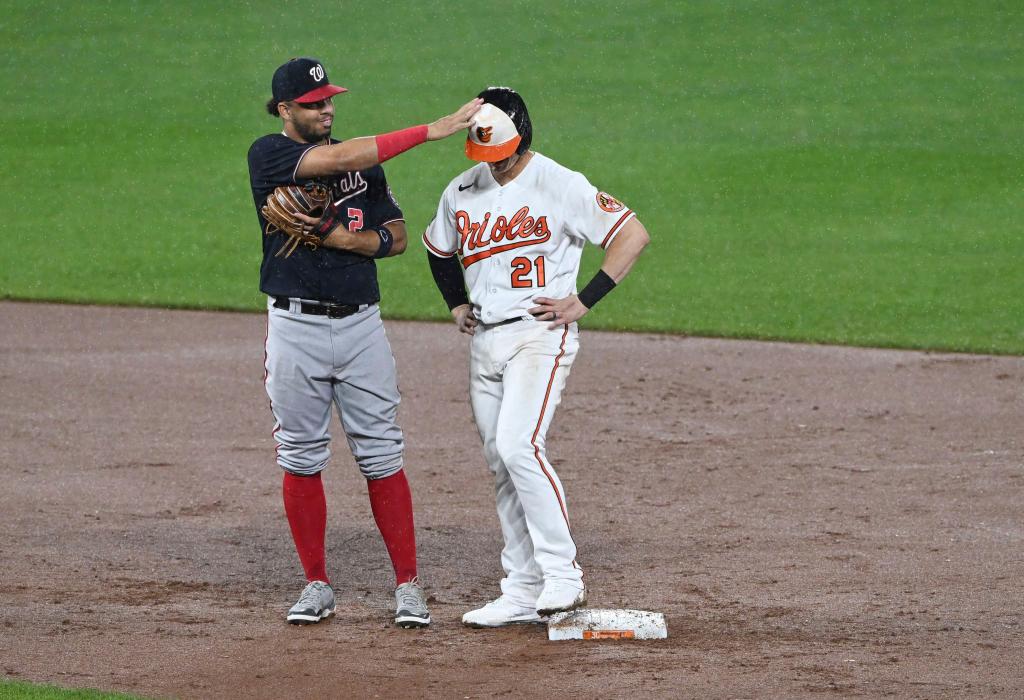 The rain picked up its intensity again as Austin Hays stepped to the plate in the sixth inning, as if the sprinkler system in the sky could tell the Orioles outfielder was on fire. Even that water suppression system couldn’t stifle Hays, who promptly lashed the last remaining item on his checklist into left-center field.

The 26-year-old cruised into second base with a double, adding to his single, triple and home run earlier in the game. For some time, the rain that continued to fall on Hays while he soaked in applause at Camden Yards on Wednesday night was the only thing that stood in the way of him achieving history. A 44-minute delay gave way to a water-soaked resumption, but it was enough to give Hays a fourth at-bat.

Hays’ performance started innocently enough, with an infield single to lead off the first inning against Washington Nationals left-hander Patrick Corbin. It escalated from there, with three straight extra-base hits a major part of Baltimore’s offensive outburst on the way to a 7-0 lead.

Hays became the sixth player in Orioles history to hit for the cycle and the first since Jonathan Villar did so in 2019. He also threw out a runner at third base in the first inning, another standout moment for the young outfielder — the kind of plays that have vaulted him into the All-Star Game conversation.

In his second at-bat, Hays sent a homer over the left field fence before adding a stand-up triple off the right field wall in the fourth inning. Then a rain delay came, but a break in the weather gave Hays one more chance.

Mere minutes after Hays’ feat, the rain intensified and sent Wednesday’s outing into another delay. But Hays got that fourth at-bat, at least, and he didn’t miss the opportunity.

>> Right-hander Matt Harvey will begin a rehab assignment with High-A Aberdeen on Thursday. The veteran starting pitcher has 13 games remaining on his 60-game suspension for “participating in the distribution of a prohibited drug of abuse,” which came to light during Harvey’s testimony in the February trial of former Los Angeles Angels employee Eric Kay for the death of Angels pitcher Tyler Skaggs. The earliest Harvey would be eligible for reinstatement with Triple-A Norfolk is July 7. In the meantime, he can pitch at lower levels in the minors.

>> Infielder Ramón Urías began baseball activities Wednesday, including some light swinging. “This is the first day getting him going back on track” after Urías’ left oblique injury, manager Brandon Hyde said.

>> Left-hander Bruce Zimmermann, who was demoted last week to Triple-A Norfolk, allowed five runs on seven hits with three walks and seven strikeouts in his first five innings for the Tides. He entered out of the bullpen in the second inning and allowed all five runs in that frame before settling down.

This story will be updated.

Orioles players to hit for the cycle