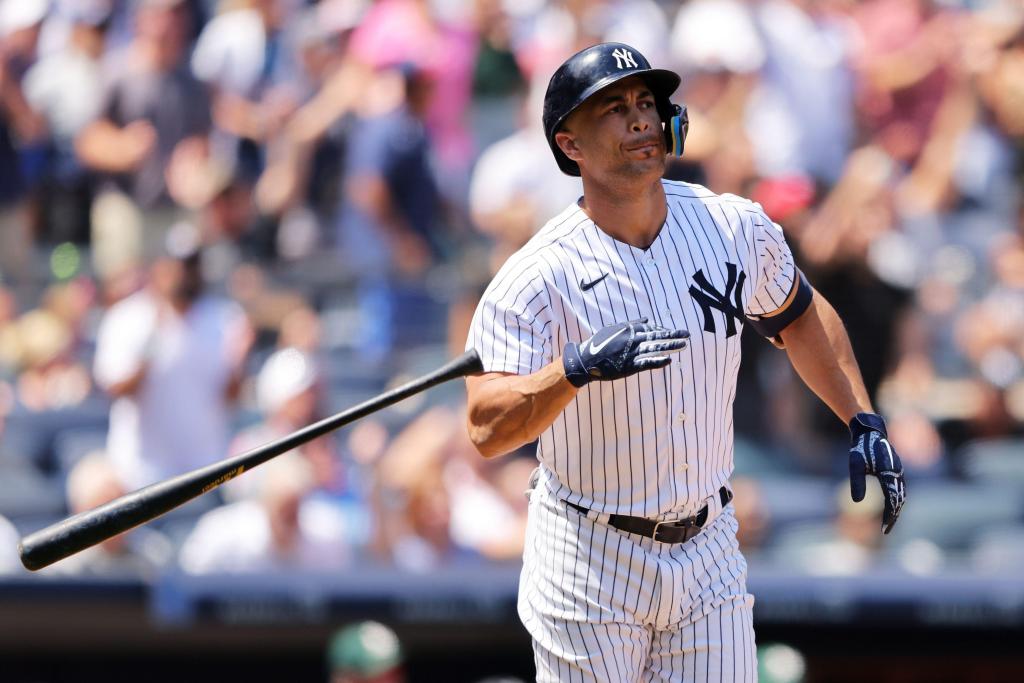 Aaron Judge and Giancarlo Stanton each homered as the Yankees set a new major league record for home runs in the month of June — with a game to go. The Bombers scored all their runs on those two shots as they completed the three-game sweep of the A’s 5-3 Wednesday afternoon at Yankee Stadium.

“We’re better, we’re a better team,” Yankees manager Aaron Boone said. “It’s hard to sweep, for us now, for any team we’ve been a part of in the past. I love the hunger in this group and the commitment to just the simplicity of how are we going to win the game today.

“And guys come in with that kind of singular mindset and I think, as we’ve talked about a lot here’s been a lot of confidence built up in there  because we’ve won games in a lot of different ways and had a lot of different contributors When you get results and you’re in those situations a lot and you’ve had success, or you’ve had failures, just being in those environments, I think everyone’s comfortable getting into late game situations and whether we get a result or we don’t, I think we’re comfortable and, and have a lot of confidence that we’re going to get the job done.”

Wednesday it was with the long ball. The Yankees have hit 57 homers this month, surpassing the 56 hit by the Orioles in 2016 and the Braves in 2019.

Judge tied the previous June record immediately on Wednesday. The slugger hit his major-league leading 29th home run of the season in the first with DJ LeMahieu on first. The 429-foot shot landed in the left-field bleachers.

Judge’s 29 homers tie Mickey Mantle for the most home runs hit before the All-Star break. Mantle hit 29 prior to the Midsummer Classic in 1956 and 1961.

Stanton hit his 19th of the season in the third, a three-run shot that put the Yankees back in control. His 391-foot homer went to right-center field and was his fifth homer in six games. All of his last five hits have been homers.

The Yankees lead the majors with 126 homers with the Braves the next closest with 113.

Jameson Taillon gave the Yankees five innings, which was impressive after a rough start. The right-hander got rocked in the first, giving up three runs on four hits, needing 25 pitches to get through the inning.

But that was it.

Taillon adjusted and held the A’s to just those three on a two-run double to Stephen Piscotty and an RBI-single to Elvis Andrus. He walked two, only the second time this season he’s walked more than one in a game. He struck out six and allowed just three more hits over the next four innings.

Taillon needed 101 pitches to get through five, 14 he threw for swing-and-misses, including six on his fastball. He got six called strikes with his curve.