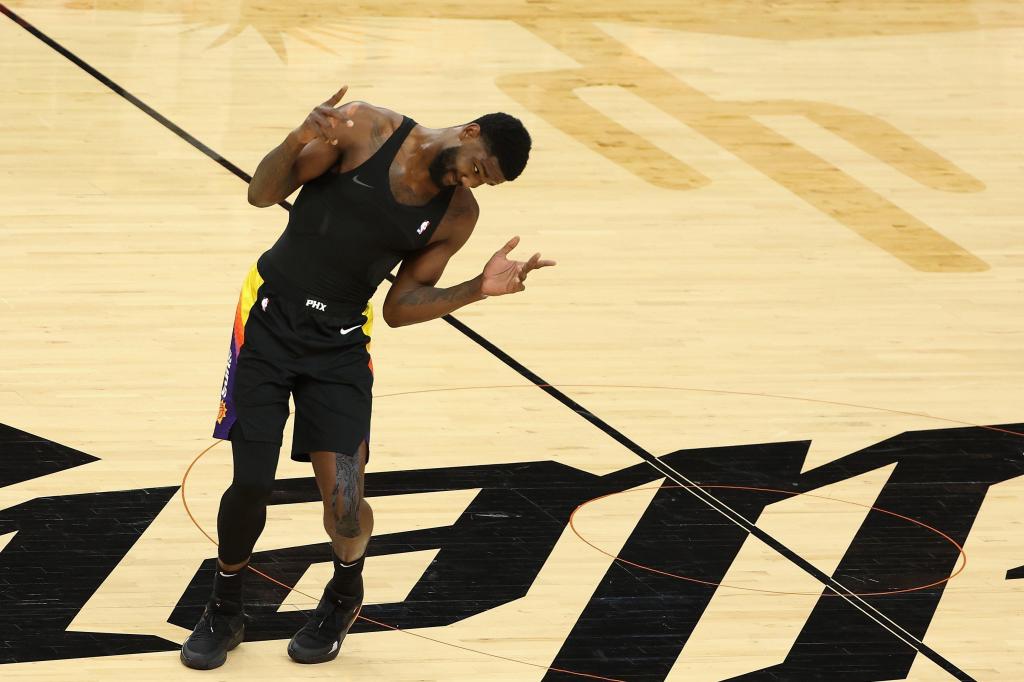 A trade sending embattled Phoenix Suns center Deandre Ayton to the Nets is possible – but it’s incredibly unlikely for a number of reasons.

BetMGM reported the Nets have had interest in Ayton, who increasingly appears to have played his last games in Phoenix after a feud with head coach Monty Williams played out in public on the sidelines as the Dallas Mavericks eliminated the Suns in the second round of the Western Conference playoffs. The report suggested a potential package of Nic Claxton, Joe Harris and Cam Thomas headed to Phoenix to land Ayton in Brooklyn and create a Big 4 that also features Kevin Durant, Ben Simmons and the newly re-committed Kyrie Irving.

But not only does the NBA’s collective bargaining agreement make a deal for Ayton very unlikely, it also makes both the Nets and Ayton losers if a deal were to be consummated.

A sign-and-trade for Ayton hard caps the Nets

That’s an important note because the apron increases or decreases each year by one-half the percentage that the salary cap increases. The NBA set the 2021-22 apron at $143M, which means it will increase roughly five percent to $150.1M.

That means that any team that acquires a player in a sign-and-trade cannot, under any circumstances, have a payroll that exceeds $150.1M. If the Nets acquired Ayton in a sign-and-trade deal that pays him comparable numbers to what’s been reported for Knicks target Jalen Brunson – four years, $110M – that would mark an average annual value of $27.5M on his deal.

And no, the Nets wouldn’t be able to exceed the hard cap to sign players to minimum contracts.

Ayton’s other route to Brooklyn isn’t feasible, either

Ayton could theoretically accept the $16.4M qualifying offer (QO) from the Suns. Restricted free agents like Ayton accept the QO because their parent team reserves the right to match any competing offers, meaning if the Detroit Pistons and Ayton agreed to a four-year deal worth $120M, and the Suns wanted to keep him in Phoenix, they could do so by matching Detroit’s offer.

This is where the qualifying offer comes into play: It’s a one-year deal at a predetermined salary that then allows the player to become a true unrestricted free agent the following season. If Ayton were to sign the QO, the Suns could then trade him to any team, and it wouldn’t hard cap them at the apron.

Two things, however, come into play. First, the Suns wouldn’t be able to trade Ayton right away. They would have to wait until Dec. 15 as outlined by the collective bargaining agreement.

Second, and more importantly, the Nets would not acquire Ayton’s Bird Rights this way.

Bird Rights are important because they allow a team to exceed the salary cap to retain their own free agents. Bird Rights normally transfer via trade with a player to his new team (the Nets inherited Bruce Brown’s Bird Rights from the Pistons), but because Ayton would be returning to the Suns at the qualifying offer – which functions as a new one-year deal – then agreeing to a trade midseason, the CBA prevents Ayton’s new team from inheriting his Bird Rights..

That means the Nets wouldn’t be able to give Ayton any more than a 20% raise on his qualifying offer amount, which totals out to a four-year deal worth around $85M. And by all indications, Ayton is seeking a payday in excess of $100M.

Ayton isn’t necessary for the Nets

Yes, the Nets need rebounding, size and rim protection, but as long as Nic Claxton continues to put on weight and strength – not to mention improves his free throw shooting – he should be the natural answer at the five in a lineup alongside Irving, Durant, Simmons and Joe Harris. The Nets have a star-studded lineup and have a number of trade exceptions at their disposal to build their roster. They also have a $6M taxpayer’s mid-level exception that can be used to sign free agents.

It’s not the most wiggle room, but with the star power on the team, it should be enough to build a competent roster capable of competing for a championship. Ayton-to-the-Nets sounds good and looks good on paper, but the salary cap realities of a deal make it unlikely.

Unlikely, however, isn’t impossible, and the Nets are going to pull off whatever deal they feel brings them closer to a championship.