Letters: Learn how these rights were won, because we could lose them 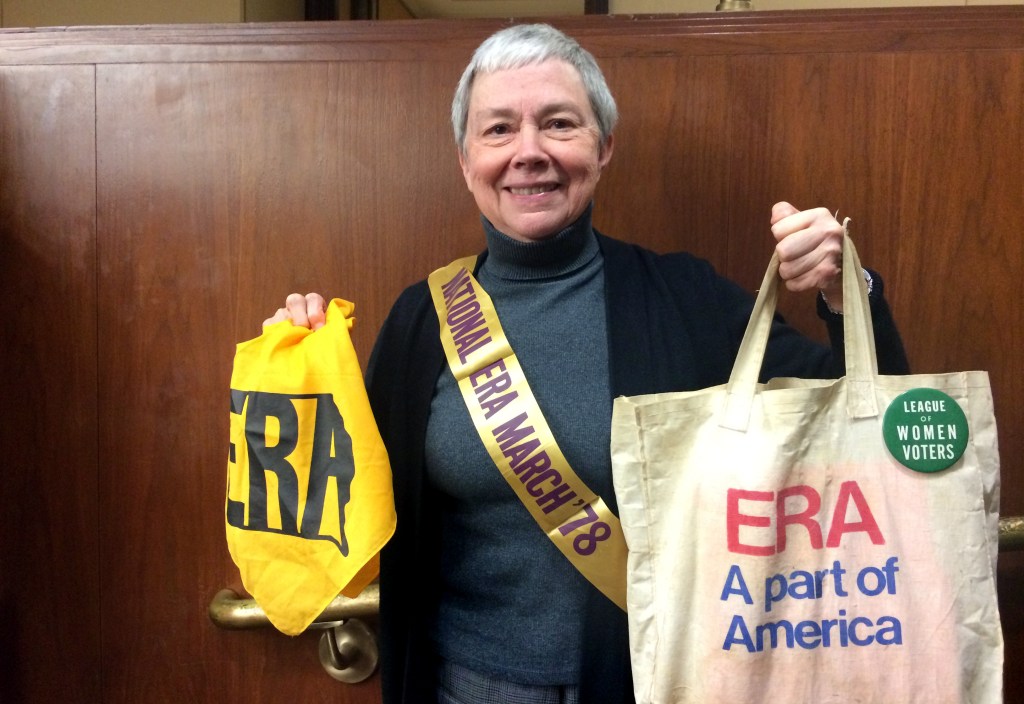 A few years ago I wrote an article on women’s rights to a Wisconsin newspaper and the response was strong (4,000 comments from around the world, from men and women). I followed that later with a book that detailed women’s struggle for basic rights and more over the last century, including 500 comments from the article. The struggles didn’t just include marches, but beatings, prison and force-feedings. (“What Young Women May Not Know,” available on Amazon)

Women won the right to vote in 1926, then to own property and have credit, to have birth control in the ’60s, educational and sports equality through Title IX in the ’70s, including the right to decide their own health care including abortion. This all was followed by marriage equality and more, even though the Equal Rights Amendment was never ratified.

I ended by asking people to pay attention, to be aware, and to learn how these fragile rights, fought for over decades, were won because we could easily lose them, lose them all.

The law catches up with the science

On June 24 the Supreme Court justly struck down Roe v. Wade, which from its inception radically distorted the Constitution, allowing for abortion without restriction up til the moment of birth.

For years the left’s been complacent with the luxury of Roe and not having to debate the issue. This is no longer the case, although they still have the mainstream media to help push their false reproductive “healthcare” narrative instead of acknowledging that abortion always ends a human life.

Abortion hasn’t been banned, but will be properly regulated through elected state representatives. The law has finally caught up with the science, which is a huge win for women’s rights and the sanctity of life.

It’s solely a woman’s inherent power to give birth. And she therefore doesn’t need permission from the government. Motherhood is her ability and therefore her decision.

A human or not?

Anticipating all the drama that is sure to follow reversal of Roe vs Wade I would like an answer to the only question that really matters. Is a fetus human or is it not? If it is, then abortion is murder pure and simple. If we say a fetus is not human then by what criteria do we make that judgment? In what way is a fetus guilty of not being human? To kill any human without evidence of guilt trivializes all lives.

I blame Biden, too

As the country reels, along with the opinion in many other nations, from the Supreme Court’s decision to reverse Roe v. Wade, I hear much of the blame being directed at the Court, particularly the three Trump appointees, two of whom swore under oath that they would adhere to precedent.

However, looking back over what was certainly predictable to the hearings that resulted in Clarence Thomas being appointed to the Court, blame for the abortion result can be spread further.  Thomas replaced Thurgood Marshall, an ant hill replacing a mountain.  But his political beliefs were always clear.

Joe Biden, then chair of the Senate Judiciary Committee, cut off the hearings, replete with salacious material about Thomas, and deprived several additional witnesses from testifying about Thomas’ conduct. His nomination squeaked through, 52-48. Once again, Biden wanted to be the “good guy.” He still does, in his hopeless quest for a bipartisan administration. Apparently it’s more important to be “Good Old Uncle Joe” than to face the reality that something will never happen.

Yes, the abortion ruling was disastrous, as was the gun case, the impingement on religious freedom in the several cases destroying the fabric of the separation of church and state, but going back to 1991, many senators, both Republicans and Democrats, saw the danger of Clarence Thomas, who he was and who he is.  Sad that our president was so naive and remains that way.

I am an 81-year-old retired attorney. In spite of the many assorted jokes, some funny (some true) about unscrupulous lawyers, I have always been proud to be part of the legal profession. The Supreme Court decision of June 24 has changed that. It appears that our Supreme Court has become a haven for liars.

Clarence Thomas falsely denied his relationship with Anita Hill on national television. It didn’t require a polygraph to ascertain who was telling the truth and who was not. More recently three candidates for confirmation to the court followed suit. Those aspiring justices, under oath, claimed respect for “Stare Decisis” and stated that Roe v Wade is the law of the land.

Donald J. Trump was unsuccessful in lying to retain his hold on the Oval Office. His nominees for the Court were better at disguising the truth. They were rewarded with lucrative, lifetime positions on the highest court of the land. The very same court that our framers envisioned as the ultimate “check and balance” in our government. The very bastion of truth and integrity should be our Supreme Court.

Obviously I am in disagreement with last week’s decision. More importantly, I am discouraged, humiliated, and heartbroken that deceitful members of the majority brought shame and disgrace to the Supreme Court of the United States.

Budgets that are pro-life

The success of the Right to Life movement in overturning Roe v. Wade is truly impressive. Many supporters say it is only the beginning.

I hope that means the movement will seek budgets that are pro-life. To me that means adopting measures such as expanded child tax credits that are fully refundable, requiring employers to pay employees who take maternity and paternity leave, and providing increased state funding for early childhood education. These steps should be taken regardless of which party proposes them.

Roe v. Wade allowed state legislators to say that they supported the  lives of children without having to actually vote on difficult taxation and funding choices. Voters should watch now to see which of their representatives truly support families and children.  Then they should cast their ballots for those who back words with action.

The text of the Second Amendment states, “the right of the people to keep and bear Arms, shall not be infringed”, but like all rights it is not absolute, particularly when it encounters other rights. Thus, there are numerous laws regulating gun ownership and the right to carry guns, such as the Minnesota permit-to-carry law.

The Supreme Court decision was narrow, focusing on the specific language in a New York law requiring a person to demonstrate a particular need to carry a gun. This contrasts with the Minnesota law, which establishes a set of rules that must be met to obtain a permit. The key difference between New York and Minnesota is that in New York the person must prove he needs to carry a gun while in Minnesota the state must demonstrate the person is not qualified, i.e. the burden of proof shifts from the owner to the government.

In other words, under the New York law the person does not have a fundamental right to carry a gun, but under Minnesota they do (but again, it is not absolute).

Perhaps it helps to compare this to free speech.  The First Amendment states “Congress shall make no law … abridging the freedom of speech …”.  Imagine the uproar if a law was passed requiring someone to demonstrate a specific need before they had the right to speak. One can argue that laws regulating guns are much more restrictive than speech, i.e., you don’t need a permit to speak that is equivalent to a permit to carry and, therefore, courts could rule that these are also unconstitutional. However, it is clear from their opinions that the justices see a difference. Again, the difference being a person has a right to bear arms but must meet certain requirements (because guns are more dangerous to others than speech), versus a person does not have a right to bear arms but must demonstrate a special need.

Now people are rightly upset about gun violence, and some believe the Second Amendment is no longer appropriate as times have changed. For those the answer should be clear: They need to work to pass a constitutional amendment changing the Second Amendment. Under our Constitution this is the correct way to proceed, not by creating laws which violate the Constitution.

Help through the heat of summer

As I ride my bike around St. Paul, I notice that many of the newly planted trees are wilting from heat stress and drought. If you have a new or otherwise young tree where you live, please adopt it, keep it watered, and help it through the heat of summer.

I mostly knew Jack Hoeschler through our Friday luncheons at the Downtowner (“A gentle fighter for the underdogs and artists,” June 27). He had a great curiosity about so many things. I once lent him a lengthy audio book on the history of the British empire.  He liked it so much that he bought his own copy.

Also, he was witty. He humorously explained the finer distinctions between the various angels in the nine choirs of angels of the Roman Catholic Church. I learned the differences between the seraphim, cherubim, archangels and others in the heavenly pantheon. Such knowledge will serve me well, in the event I should ever meet up with any of that crew of heavenly creatures.

Jack had a great love of nature and enjoyed leading friends and acquaintances on tours of the Japanese garden that he and Linda cared for in their backyard. As the garden’s official “Moss Cowboy,” he was the self-appointed seeker and finder of wild moss for the garden. There is a deeply spiritual aspect and artistic aesthetic to Japanese gardens. That spirituality and love of art was an important part of Jack.

Jack often showed kindness and compassion toward others who were needy and less fortunate. He once told me about the young man who had climbed out of the ravine in Hoeschler’s backyard and showed up nearly naked at the back door one cold autumn evening. The young man was cold and shivering.  He may have had some serous personal issues, or perhaps he had been taking who-knows-what street drugs. In any case, Jack took him in, gave him some blankets for warmth and then called the young man’s father, who gratefully came and picked up his troubled son. I’m not sure how I would have handled that situation, but Jack handled it with great compassion, and he showed deep respect to a fellow human who was struggling with life. What a mensch! It was such a privilege having known Jack, as I did.