Andrew Vaughn, back at the site of his big-league debut, is putting up All-Star-caliber numbers for the Chicago White Sox 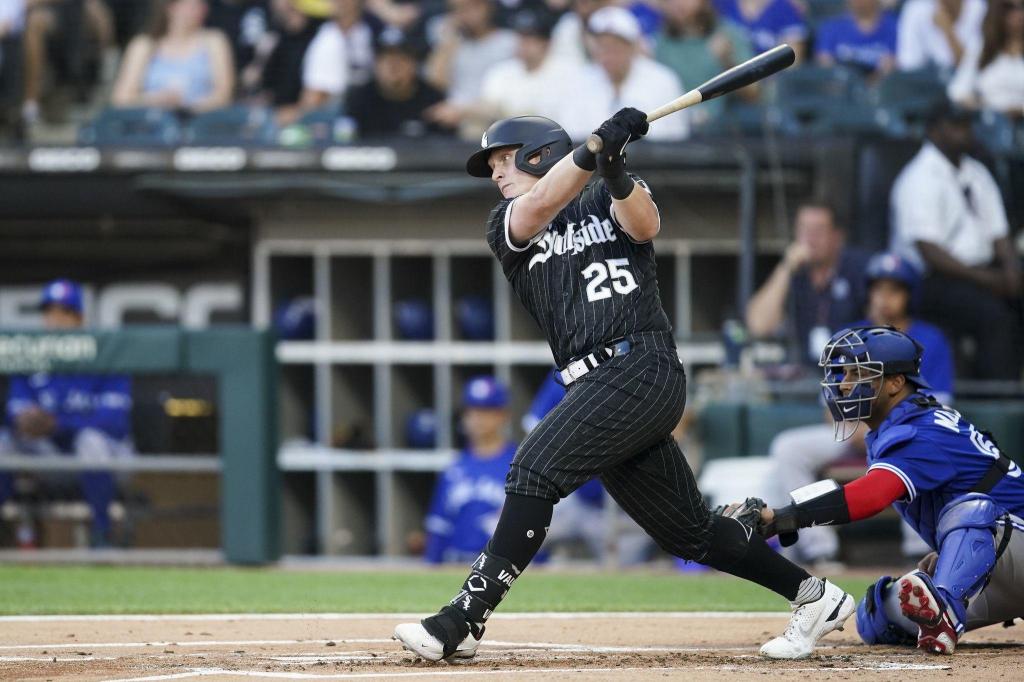 A tribute board hangs near the entrance of the visiting clubhouse at Angel Stadium, acknowledging players who made their major-league debuts at the ballpark since 2020.

“It’s kind of cool,” Vaughn said before Monday’s series opener against the Los Angeles Angels. “They have a little thing in the clubhouse that has a bunch of (autographed) balls from guys that debuted. I got to be up there, which is kind of special.

“Brings back a lot of memories.”

“It was a whirlwind,” Vaughn said. “So many emotions. Nerves. Excitement. It’s tough to put into words how much was going through my head.

“Looking back, it’s been a year and a half, but it kind of feels like yesterday. It’s so cliché to say, but you don’t forget things like that.”

Vaughn said the journey from then to now has been “a learning curve.”

“I’ve gotten to improve on so many things because of that moment,” Vaughn said. “I got to just build upon it and learn what it’s like and how this game works and evolve with it.”

In that short time, Vaughn has become one of the team’s top hitters. He entered Wednesday’s series finale slashing .307/.360/.465 with seven home runs and 33 RBIs in 56 games. He’s second on the team with 13 doubles.

Vaughn has a .798 OPS against right-handers, an improvement from .610 last season.

He was not in the starting lineup Wednesday, as manager Tony La Russa said the team wanted to give Vaughn two days — including Thursday’s day off — to “refresh his legs.”

“Most days if not all days this season, he’s as good as any hitter we have on the team, and that’s a remarkable statement to make,” La Russa said before Wednesday’s game. “He’s smart. He adjusts. He takes instruction well. And he’s a hungry hitter.”

All of that success has led to Vaughn’s name popping up in the All-Star conversation.

“They are amazing words,” he said when asked about being in the All-Star discussion. “I don’t even know how to explain it. But it’s pretty cool to be in that company. As a kid, you watch the Home Run Derby and the All-Star Game and it’s probably the coolest thing to watch during the whole year besides the playoffs.

“It would be an extreme honor, but I think the No. 1 goal — and everyone in here is the same way — is to get to the playoffs.”

Among Vaughn’s favorite All-Star week moments were a couple that occurred in 2007 in San Francisco.

“Vlad (Guerrero) Sr.’s Home Run Derby in San Francisco, hitting the glove (well beyond the left-center wall), which was basically thought to be unheard of,” Vaughn said. “The Ichiro (Suzuki) inside-the-park home run in SF (in the fifth inning of the All-Star Game) was insane. Just so many (moments).”

Vaughn was born in Santa Rosa, Calif., and played college baseball at California. The Sox selected him with the No. 3 pick in the 2019 draft.

He said his parents and sister were in attendance at Angel Stadium. He’s expecting more friends and family when the Sox play the Giants this weekend at Oracle Park. That three-game series begins Friday.

“It’s really cool,” he said. “As a kid I was a Giants fan, I went to Giants games. Giants games were where it was at. Fun, a great atmosphere. It’s going to be pretty special to get to play there after sitting in the stands so many times.”