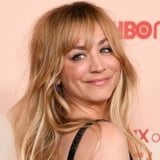 Kaley Cuoco's new comedic-thriller series takes a deep dive into the world of true crime and toilets. Adding to her growing list of onscreen investigations, the "Flight Attendant" star is set to lead Peacock's new true-crime–inspired series about three people whose lives get flipped upside down after an uncanny series of events brings them together - featuring scenes interspersed with literal toilet humor. Read: a mystery-comedy–lover's dream come true.

For anyone who was invested in the absurdity and genre-specific irony of Netflix's "The Woman in the House Across the Street From the Girl in the Window," Peacock's new series is on its way to immerse us in another eccentric mystery. According to the streaming platform, the show is about "a realtor, a plumber and a former tennis star whose lives unexpectedly collide, exposing America's obsession with true crime, murder, and the slow-close toilet seat." Not the typical thriller theme, but we're intrigued.

"Based on a True Story" Cast

Kaley Cuoco will lead the series as a married woman named Ava Bartlett, who might play the realtor, according to Deadline. While parts of "Based on a True Story" were reportedly influenced by true events, Peacock has not shared any additional details about the series or the actual crime that inspired it. No additional cast members have been announced.

Related:
Fans May Have Decoded Megan's Cryptic Snapchat in "The Flight Attendant"

"Based on a True Story" Premiere Date

"Based on a True Story" will be executive produced by "Ozark" star Jason Bateman, Michael Costigan, and Craig Rosenberg, who will also serve as the showrunner through Aggregate Films. No official premiere date has been announced.

"Based on a True Story" Trailer

Peacock has not yet released an official trailer for "Based on a True Story."