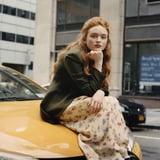 It may be a while until season five of "Stranger Things" hits our screens - as of Aug. 2, the writers had only just begun working on the script - but the cast is definitely keeping in touch in the interim. In an Aug. 16 interview with W Magazine, Sadie Sink, who plays Max on the show, explained that she and her costars have a bond that extends offscreen. "Yeah, we keep in touch all the time," she said. "I was just on FaceTime with Gaten [Matarazzo] and Caleb [McLaughlin] last night."

Apparently, COVID-19 only increased the cast's closeness. "Over quarantine, there would be an occasional text like, 'Is everyone okay? I hope we get back to work soon!'" she said. "After that period of uncertainty, there was an intense appreciation for one another when we reunited on set."

Back in July, Sink accompanied costar Maya Hawke to Matarazzo's first night starring in Broadway's "Dear Evan Hansen." "Just to see them there was like the icing on the cake. They were just so ecstatic for me," Matarazzo previously told POPSUGAR. "It just almost made me very, very emotional. And I don't think they know that, how much it really meant to me, but I'll text them."

Clearly, the tight-knit Hawkins crew - who are always willing to jump into action to save each other from the dangers of the Upside Down - also make sure to be there for each other in the real world. Max has similarly learned to treasure the people in her life over the course of the show, Sink told W, especially given what happened to the character at the end of season four. "Poor Max - who knows? She's definitely not able to make it to the movie date on Friday. A lot is up in the air," she said in the interview. "But after this whole experience, she's probably learned a lot about the value of keeping people close in her life. . .It feels like she's ready to let people back into her life, heal, and move on from everything. Sadly, that was interrupted. But I would like to see her go further with that and be in a place where she's fully herself again."

Sink has recently been on her own journey towards self-acceptance, telling Glamour in June that learning to appreciate herself for who she is has been a process. "Growing up in this industry, you always kind of compare yourself to others," she said in the Glamour interview. "That's when you start doubting your abilities and those were my biggest insecurities, particularly in terms of coming into my own as an actor. As you get more experience, it becomes less about the competition and thinking 'Oh my God, am I good enough?' and more about finding yourself and drowning out the noise that comes with being in this industry."

Ahead, check out more photos from her W Magazine shoot, courtesy of the W team's TV portfolio and created by photographer Lea Winkler, makeup artist Tyron Machhausen, and stylist Tommy Buckett. Sink dressed as "Seinfeld"'s Elaine Benes when tasked with recreating a look from her favorite TV character for the shoot.